Well welcome me to the broadband revolution, that being ‘broadband‘ in the very loosest sense of the word.

The light finally stopped blinking this afternoon after almost a week of the line not being synced, which meant I was finally connected after activating the account this evening! So I’m posting this from home, on my coffee table with my laptop watching Jackass on TV. The bliss!

The line is however rather slow..and proceeded to disconnect itself every 3.46 minutes after I first connected, I switched the cheap-ass china brand ZTE modem out for my own trusty ADSL enabled router.

My mighty Draytek Vigor 2600, which has a splendid feature set and has never failed me in the UK. 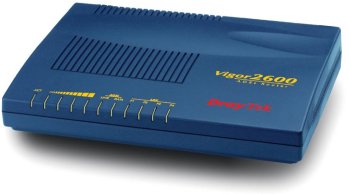 The line is slightly faster and more stable now, but it’s still a crawl compared to the mighty 1MB it’s supposed to be running at..

The speed and stability issues are probably to do with the quality of the copper pairs from my appartment, the phone itself is quiet (possible low gain on the line) and it sometimes crackles (which may account for the ADSL dropping sometimes) as there is probably static on the line.

But well it’s still like 4 times better that dialup, which is a big difference, I’ll have to shout at them until it gets to at least 800kbps, then at least it’s worth paying for 1MB. I’m basically posting now, because I can.

On another note I found a couple of intersting things, the only automated face reader in the world, https://www.faceanalyzer.com/[/url].

50 Things you should eat before you die!
The Aches, The Downtime, The PC Debacle

One Response to Because I can?