Beerfest Asia 2015 In Singapore – My Review

It just so happened when our group was heading down to Singapore for the Yellow Belly tasting and to do a little craft beer tour around Singapore, it was the same weekend as Beerfest Asia 2015 – it wasn’t the purpose of our visit, but we thought why not drop by for a while seen as though we’re there. 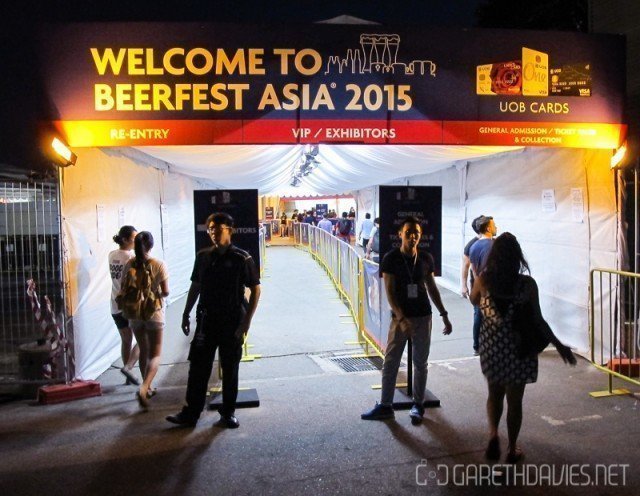 I’ve actually never been before, the event itself has been running since for a number of years and has garnered quite a following (18,000 people in 2013, 30,000 last year and 32,000 this year) – so it’s quite a large scale event. It wasn’t that busy though, perhaps because we were quite late. 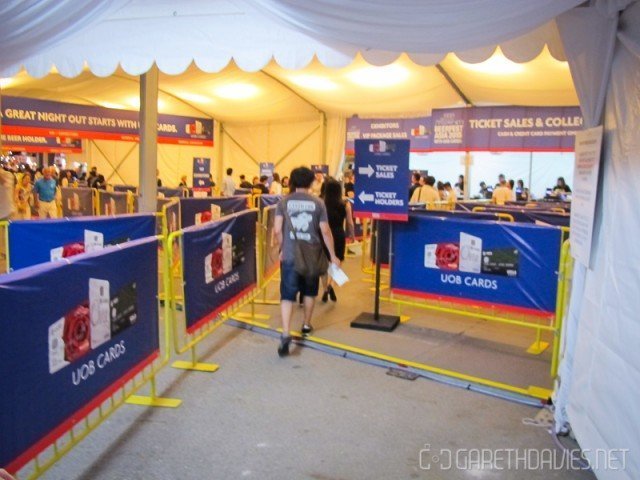 It’s not really a high end beer event, and in many aspects, it’s not even a craft beer event. The amount of craft beer there as compared to the beer available in general, is in a small minority with the festival being dominated by subsidiaries of SABMiller and ABInBev.

There’s the odd few good beers from the guys at Smith Street Taps and TSA Wines, and even the guys with the good beers combined themselves into just 2 stands rather than splitting themselves out – as the appreciation for the high quality beers you find at places like The Great Beer Experiment and Thirsty just isn’t really there at a large scale festival like this. 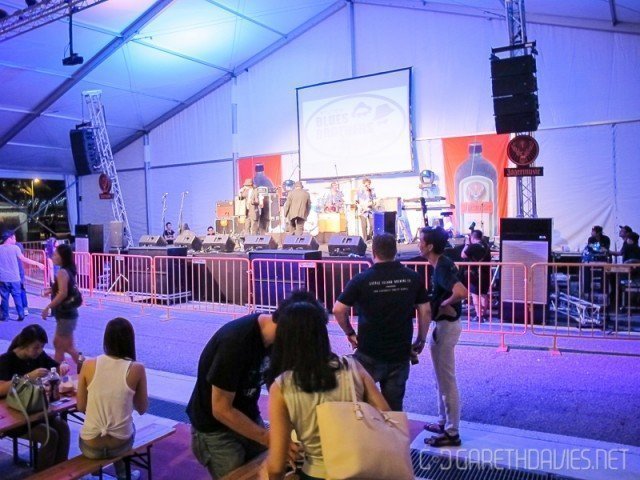 But do you know who the main festival sponsors are? Yah, not even macro beer brands..Jagermeister and Monster Energy – really? At a beer event?

This is no CBC or GABF – that’s for sure.

And even small scale beer events in the UK like Indy Man Beer Con or Birmingham Beer Bash put them to shame in terms of variety, quality and focus.

Mostly it felt like a music festival, the music was too loud, it was hot, there’s wasn’t any really exciting beer to try, there was lots of companies with corporate accounts having free flow or sponsored VIP seats. 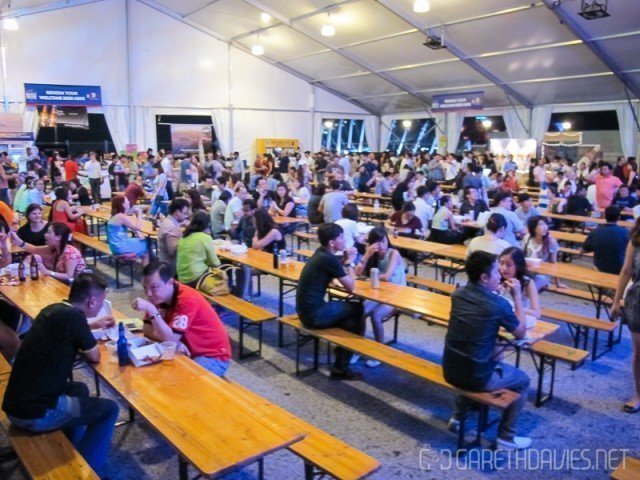 The crowd was fairly young, mostly drinking the more normal beers, there wasn’t a huge gathering at the more specialist beer stands.

The outdoor area, UOB area and VIP areas (with Jagermeister girls, free flow beer etc) were far busier than the mostly craft beer side of the festival. 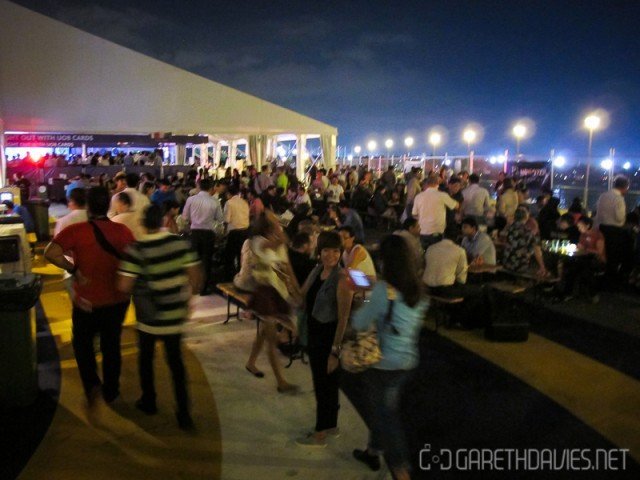 We had fun though as the importers opened some special bottles for us, so we got to try some really interesting UK beers. Mostly stuff from Siren and Weird Beard like Sadako, Whiskey Sour etc. 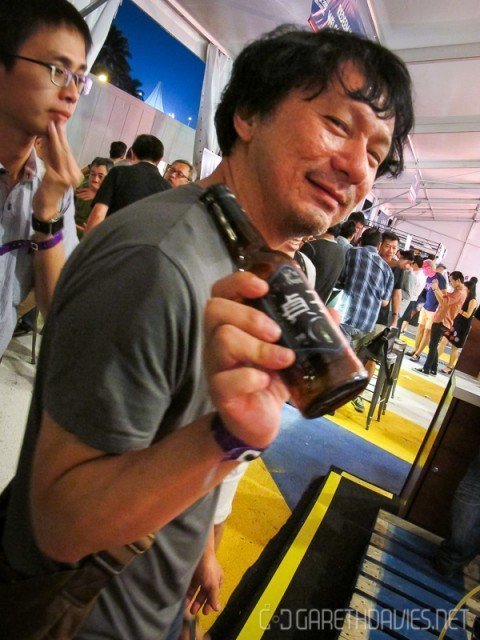 The ‘welcome’ beers which you get with the rather expensive ticket were very disappointing. And the ticket price, at $40SGD, wasn’t cheap for one macro beer and that’s all (food had to be paid for, all other beers had to be bought using tokens so the organisers could take a cut from the vendors).

Would I go back again? Honestly I don’t know, if I got free tickets and happened to be in Singapore – maybe, to support the craft beer guys in Singapore.

But likely? Not really, huge noisy, sweaty, unfocused events are not really my cup of tea now I’m old anyway – I’d prefer to go support the Singapore craft beer scene at their bars and bottle shops. 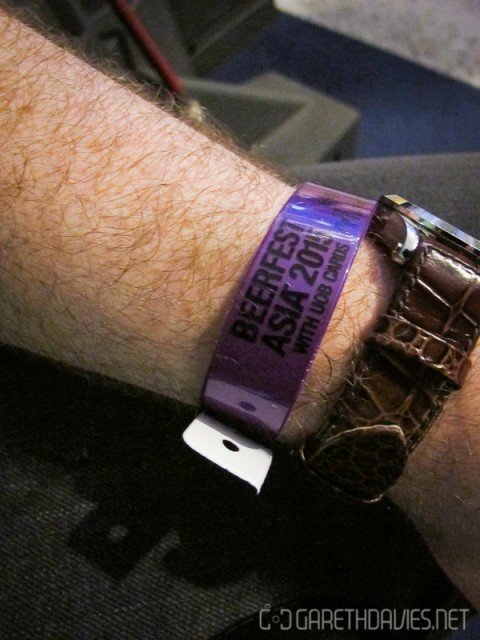 We had a good day anyway, having been at Thirsty and having some wicked ramen at Tampopo haha.

Plus met up with some friends, and there were a few good beers for sale, we managed to pick up some Belgian sours, Moa Imperial Stout and a couple of other nice drinkers. Nothing spectacular though.

I’d love to see a proper beer festival in Asia, for the love of beer, all about craft beer (or great beer from big brewers like Fuller’s Imperial Stout). Where you pay your ticket price, you get a glass and you can basically drink whatever you want.

Some things only have 1 keg, some beers are only made by the brewer specifically for that festival and the focus is trying new amazing beers! People would definitely travel regionally for something like that, and possibly even internationally if it was really World class.

There are some rumblings regionally, like Beertopia in Hong Kong which had some superb beers and has very relevant sponsors, including Spiegelau glasses! Here’s the beer list of 551 beers, tell me how many macro breweries you spot in there?

And they have incredible beers from Founders, Jolly Pumpkin, Stillwater, Omnipollo, De Molen, 8 Wired and MANY more. Maybe I’ll head over there next year instead 😉

For me, I hope to see more events in Asia promoting the spirit of craft beer, experimentation, pushing the small guys up, supporting the local craft beer scene in the region and much more about education and consumer awareness rather than just volume. 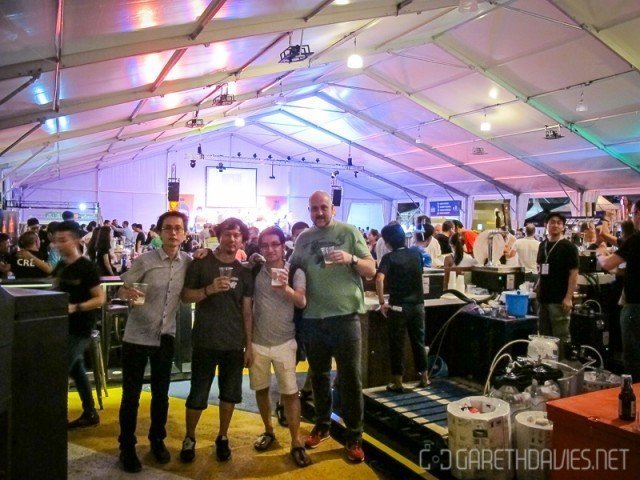 Another small detail that annoyed me was the fact that the website and organisers stated it was a non-smoking event and venue, and that it would be enforced with fines. But I saw people smoking in the venue, and no one really gave a second glance (including security who walked right past) – as long as they keep paying right?

Oh yah, one more..last one I promise. Where was the event companion app? The app based guide which helped me search for beers, locate which stall they were at, and where I could find that stall? You could roll out a simple webview app for this with almost no budget, forget geolocation and fancy tricks, just a basic listing app with a search function and a static map which can show you where to go (like the directories in shopping malls).

Beerfast Asia is a booze and music event, not a craft beer event – so don’t be mistaken. As for supporting the local scene, they had Archipelago probably because it’s a subsidiary of Asia Pacific Breweries, but where was RedDot, Brewerkz, 1925, The Pump Room, LeVeL 33, and Hospoda? I think Jungle Beer has gone MIA – but still – I was kinda disappointed at the showing of local Singapore brews.

I guess it’s worth going once, and if you’re around next year in Singapore you can keep up with what they’re doing below.