So a while back I was invited for a very interesting Alcohol related event by my homeboy Eric Lim, it was something to do with education – which is good because I have to admit I know very little about vodka and in this case it was an invite to ABSOLUT AKADEMI. The blurb was like this:

For one special evening only, the world-renowned ABSOLUT AKADEMI returns to KL for a comparative vodka tasting and appreciation session following its debut here nearly a year ago. To share the definitive ABSOLUT experience with you is mixing maestro Matthew Pomeroy, Brand Ambassador from The ABSOLUT Company in Sweden.

Of course I know about the brand ABSOLUT and I know a bit about it (it’s from Sweden, it has a bunch of flavours, their ads always look the same etc). 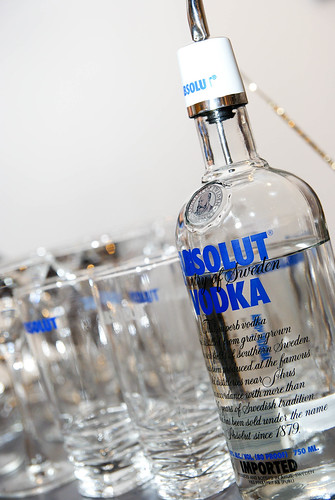 They had Matt Pomeroy over in KL, who is basically the global brand ambassador for Absolut (from what I understood). The second important point to note is that ALL the attractive blonde girls in Sweden belong to him – just so we are clear on that.

Matt has worked in the hospitality industry for 16 years. During this time Matt has opened and managed some of London’s most established bar and restaurant venues such as Le Pont De La Tour, Chez Kristof, Northbank, and the UK’s most important and iconic vodka bar, Baltic.

Matt has also been successful in various national and international cocktail competitions and he was a part of the UK ‘Class’ bar team of the year. He also opened the Time Out UK magazine’s best new restaurant of the year and has written articles on cocktails and spirits for iconic men’s magazines such as Esquire and GQ.

In 2008 Matt moved to Poland as Global Brand Ambassador for Wyborowa, Luksusowa and Siwucha. During this two year period Matt traveled the globe conducting educational sessions, vodka master-class seminars, and cocktail demonstrations while he continued to excel, develop and champion these iconic brands and the vodka category as a whole. New challenges beckoned in September 2010 and Matt moved to Sweden to start his new role as Global Brand Ambassador for ABSOLUT VODKA. 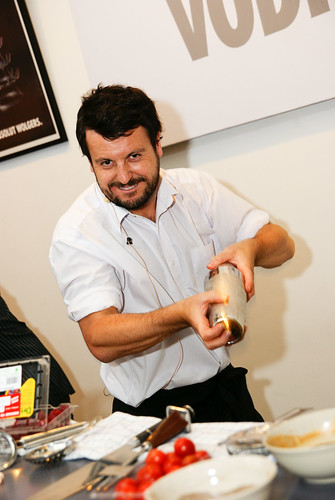 He’s an amusing chap – one nugget that he shared with us, is that when a bar-tender is shaking a cocktail shaker – their expression would be similar to their orgasm face…how true that is? Honestly I’m not really willing to find out.

Anyway, more about the class – I actually learn a lot about tasting Vodka and the intricacies – which I discovered was fairly similar to that of single malt whisky (nose, mouth-feel, after-taste and so on).

We were given 2 rows of glasses, one row was flavoured vodkas (all from ABSOLUT) and the other were plain vodkas from all different brands (SKYY, Russian Standard, Smirnoff etc) 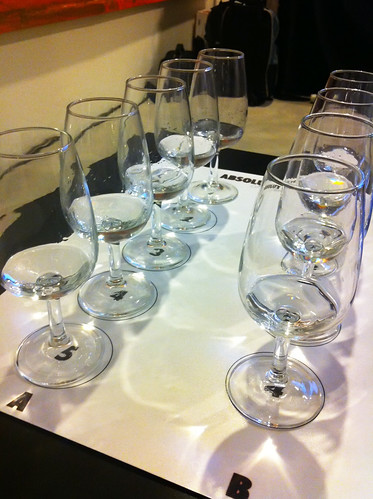 I also learn about the two schools of vodka, new school and old school. The new school of vodka generally comes from US/Canada and Western Europe with the old school vodka coming from Eastern Europe/Russia.

Then we got more into the tasting, tasting/appreciation for vodka must be done with neat vodka at room temperature (don’t smoke before hand). Some of the flavours or ‘tastes’ that can be used to describe vodka are as follows:

We also learnt about tasting with a nose peg on and how much difference smell makes (yes this is why we were in The Star looking like idiots). 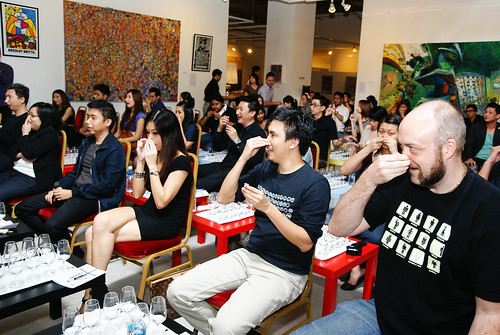 They made us eat an unknown substance whilst wearing the nose-pegs, which we all thought was brown sugar (mostly due to the texture) but actually it was cinnamon and this was super clear when we took the nose-pegs off.

There are other long lists of characteristics too for taste/mouthfeel (spicy, nutty, fruity, thin, dry, sweet etc) and finish (short, long, peppery, burn, silky, dry, bitter etc). The finish is basically the taste left in your mouth after you swallow, the neutral or modern vodkas tend to have a very short finish and the old world vodka (Stolichnaya/Russian Imperial etc) tend to have a longer finish.

It’s interesting how much vodka can vary, especially when everyone has the preconception that vodka is odourless and tasteless.

Anyway that was the part I was most interested in, we also learn more about ABSOLUT, Sweden, the marketing, the branding and so on. 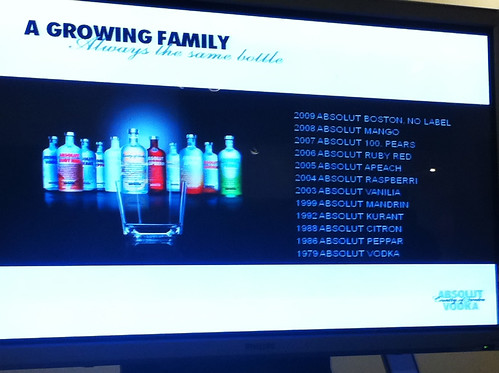 The first ABSOLUT (as we know it, in the current bottle) was launched in 1979 (a year after I was born) and their first flavour came out in 1986 and was ABSOLUT PEPPAR – great for making bloody mary’s.

After that was all over Matt showed us some cocktails that can be made with ABSOLUT, I have to say I really enjoyed the ABSOLUT Espresso Martini: 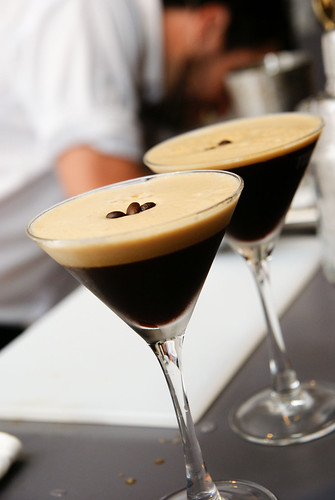 You can grab the full list of ABSOLUT Cocktails we were given here [PDF].

One thing I really respect about ABSOLUT is the whole process they have created and how strict they are compared to other brands (like Smirnoff for example). This means ABSOLUT is really consistent all over the World as every bottle is made in the same plant, with the same water and the same grains. Smirnoff makes their vodka all over the World, so if you buy bottles in a few different countries they will all taste different as they are made with different grains and different water in different environments.

And well that’s the end of that, I learned a lot and I was actually so impressed by how ABSOLUT control their distilling process that I went out a few days later and bought a bottle of original ABSOLUT from Tesco!

My only complaint would be that they should have fed us, then we could have drank MUCH MORE ABSOLUT! Other than that it was great.

And some posts from others who were there:

And from the previous year:

You Are What You Tweet – Get Your Own Twitter Infographic From Visual.ly
Alcohol-Consumer-Rights Group Malaysia (Alcon) – The Offical Launch!

2 Responses to ABSOLUT AKADEMI In KL, Malaysia With Matt Pomeroy