Recently Malaysia underwent some changes in it’s fuel structure (you may have noticed the whole RON95, RON97 thing) since September 1st they also finally changed the diesel fuel quality to something decent – Euro 2M. Apparently by 2011-2012 we will have proper Euro 4M spec diesel meaning we can really have powerful and super efficient cars (they said the Euro 4M engine versions can go down to 4.5L per 100km which is just silly).

So now we can have proper diesel cars like I’ve driven before in Europe, we were invited by BMW (Sashi in particular) on a blogger specific weekend outing to Belum Rainforest Resort to test out the new 320d and 520d sports models.

First of all I’d like thank Sashi, the BMW team and the events team for an awesome weekend and all in all one of the best organised events/outings I’ve ever attended. It was just amazingly done, attention to detail was superb and we were treated with the true premium BMW style from start to finish.

We arrived early in the morning to park our cars at Mandarin Oriental to grab some breakfast, check in and have a short briefing about the trip. We also learnt a little about Efficient Dynamics (the BMW initiative to make more efficient cars without sacrificing a dynamic driving experience).

To hammer the point home, when we set off…all the fuel tank caps were sealed! They boasted that the 520d could do 1000km on a single tank and the 320d could do 800km at least with normal driving (both at around 8L per 100km and down to 6.5L for steady driving)..we were skeptical of course. 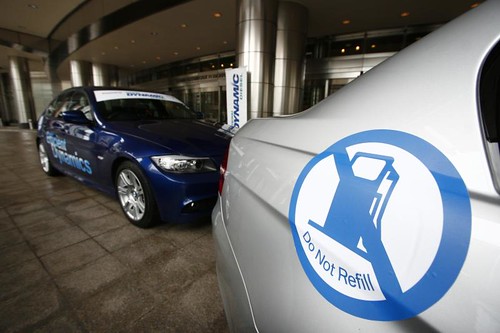 There was a flag off for each car…shortly after we were having a police escort all the way to Mutiara Damansara from KLCC! 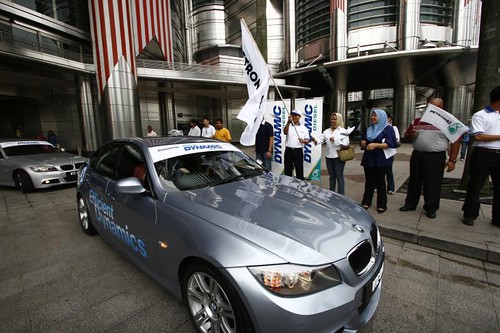 There I am driving the 320d (fast) just behind the white car (the leader, Ivan Khong). I have to say having a police escort through the busy KL traffic was so far one of the more memorable experiences in my life. Now I totally appreciate why the VIPs always do it, it’s incredible. You can see the video taken by Kim whilst I was driving over at her blog here. 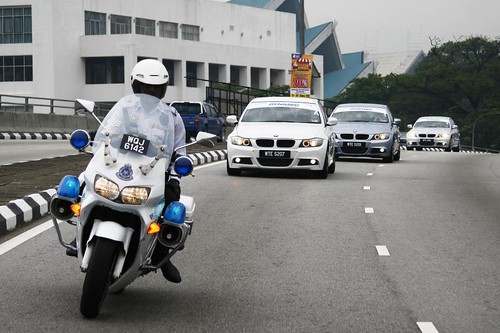 This is the main man, advanced BMW driving instructor and rally driver Ivan Khong. Yes ladies, he’s the one who will teach you how to tickle the throttle. I think I probably got the most infractions through the weekend due to my driving…but hey no-one was hurt and it was fun! 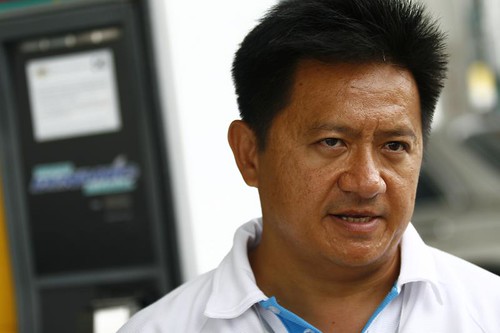 Then it was time to go full throttle! All the way to Ipoh for lunch. 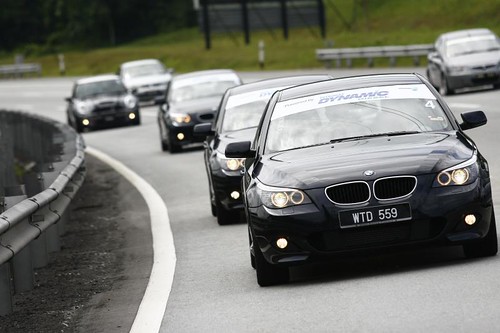 There were 4 legs to the journey, 2 to Ipoh (mostly highway) then 2 to the resort (winding roads) with each driver driving 2 of the 4. The legs were reversed on the second day so each driver got to enjoy each section (mostly to enjoy the windy part of course). Nothing much to say about the highway driving part, it’s a BMW – it’s quiet and comfortable! We encountered some rain, at that point I discovered how annoying automatic windscreen wipers are. When you want them to be faster, they are slow, when there’s only 3 raindrops they are fast! 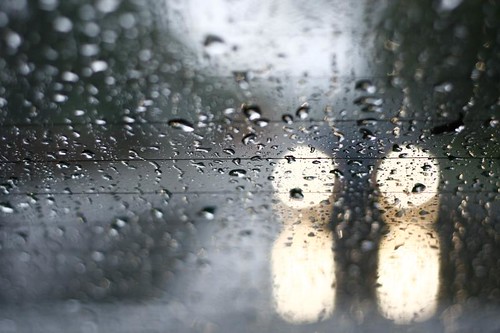 I found the windscreen wipers a bit difficult to operate, but they wiped the windows..so it’s good enough. The rain cleared up thankfully and we were back on full steam ahead. 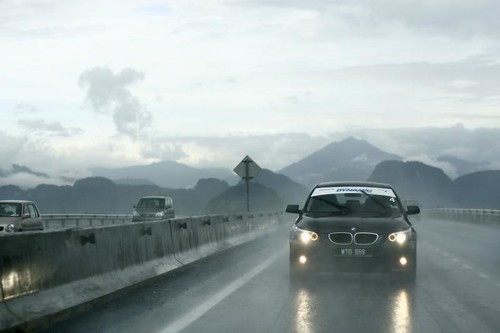 We stopped for lunch at a place in Ipoh called Indulgence and had a few more presentations about this and that. Nothing much to say about the food..I was too excited about the windy driving part! One thing about diesel cars (and the main plus for me) is they have crazy torque and these new beemers are crazier than most. Take my Airtrek Turbo for example it is a car thought to have crazy torque pushing out 343Nm/253 ft-lb with a kerb weight of around 1520kg. Now the 320d Sports Efficient Dynamics edition for examples pushes out 350 Nm/258 lb-ft of torque with a kerb weight of 1505kg..so slightly more torque and slightly lighter than my car.

And wow was it fun driving those windy roads, especially with the dynamic traction control you could really push it round the corners (and trust me we did!). 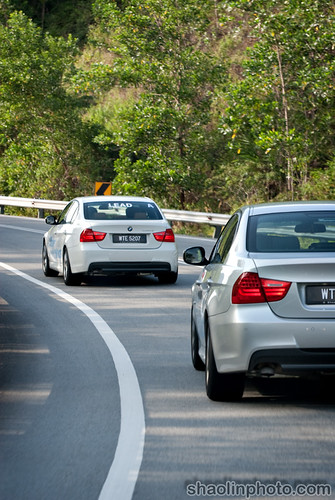 Our convoy doing some touge roads at high speed, w00t. I’d love to rip this baby on the track with the DTC off..or even the better the 330d sports! 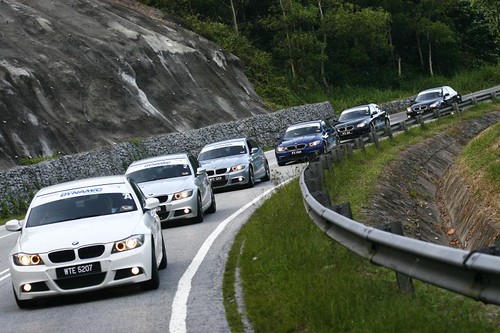 I’m not sure how fast we were going…the BMW is deceptively smooth and the power delivery is effortless…but it was fast, so I properly risked my neck taking this pic haha. 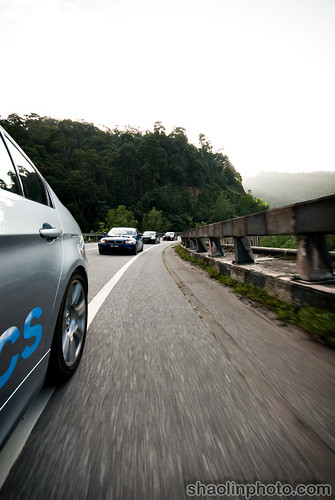 And well the official photographer was even crazier in the 530i support car (which had to pump petrol twice by the way) leaning out of the sun roof. 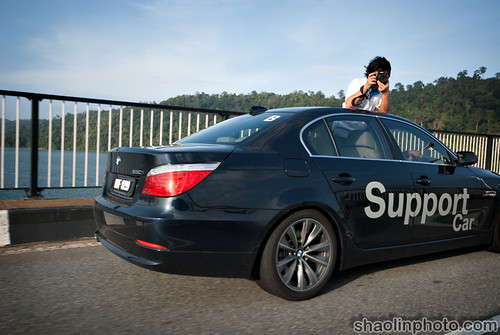 This is what greeted us (along with some champagne) at Belum Rainforest Resort, what a beautiful place – I totally recommend it. 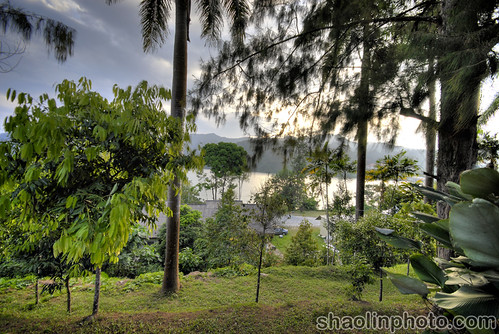 The room was really nice too, facing the lake (and very close to the lobby/restaurant haha). 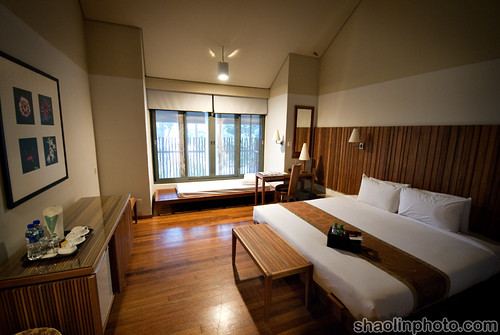 We had a bit of time to relax after the testing drive before heading down for a bbq spread at the hotel restaurant. And well what happened on the Saturday night after dinner shall stay in the forest…where it belongs.

The next day it was up early for some bamboo rafting (wtf…wasn’t too down with that) but it cured our hangovers. Following that it was time for a bit more info about how clean burning the modern diesel engines are and off back to Ipoh for lunch!

Then off for some extremely spirited driving back down the hill where some unintentional drifting occurred and some rather late braking…remember people it’s MUCH harder and more dangerous to drive fast downhill than it is uphill as gravity gives you some natural brakes.

We reached back KLCC around sunset and headed off for some dinner at Lucky Loke. Let’s just say we all would like to relive the weekend over and over again soon…please…BMW! Our car had travelled 779km and the range indicated it still had another 103km in the tank and we REALLY floored it all the way. 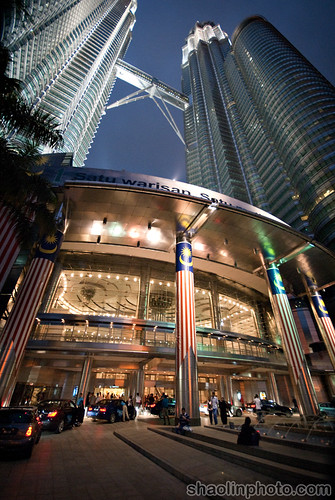 Really diesel fuel is the way forward and BMW is demonstrating it with the Efficient Dynamics diesel sports cars. I hope other manufacturers start bringing in more sporty diesel models and put more effort into educating consumers about the benefits of diesel.

Diesel roadtax is also now the same as petrol tax, no longer double and diesel fuel is 10 cents cheaper than RON95. Bear in mind for all petrol cars with this kind of performance you HAVE to pump RON97..plus 1000km for a tank is just WOW. I cry now when my car hits 300km and the petrol light comes on.

Some other posts here: