Expensive Expensive? Fuel Price up to RM2.70 Per Litre!

So the petrol price has gone up by 78cents, approximately 40%…that’s a pretty hefty hike. I’m sure everyone knows about it by now. 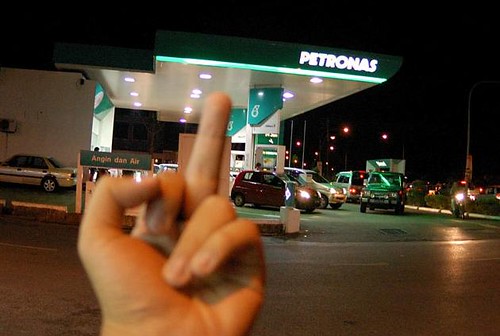 Judging by the horrific jams last night near every petrol station (3-4km tailbacks according to radio traffic reports) it seems like most of the country had heard about it.

I checked a few petrol stations and by 10pm they had actually run out of fuel, I didn’t bother queuing to pump fuel. The price is inevitable and I’m not going to waste an hour or two idling to save RM30.

So what do I think? I think as a net exporter of petroleum products Malaysia should be able to afford to give subsidy to their citizens.

But then, if they remove the subsidy (believing the economy can support it) they will free up a LOT of money for development of health care, education and public transport.

Now if public transport was adequate I don’t think anyone would be complaining about the fuel prices as you would have a viable option.

Honestly I think removing the subsidy is fine….IF and it’s a BIG IF – the public transport system is effecient, effective and has enough spread to be available to everyone in the urban area (including suburbs) AND cars are sold at the true market price (around 60% of what they are currently being sold at).

Rumours have it that the price may go up again in August as the current 78 cent hike still has a 30 cent per litre subsidy.

The plan is to give those with cars under 2000cc RM600 per year back, that’s fine if you pump petrol once a month, but for everyone else it doesn’t cut it.

Even for those with 35 litre tanks a full tank will now cost around RM95 where previously it cost RM67.

It’s still an additional headache however and we have yet to see how effecient the system will be.

Interesting times, I want to see what they are proposing to do with all the saved funds.

22 Responses to Expensive Expensive? Fuel Price up to RM2.70 Per Litre!