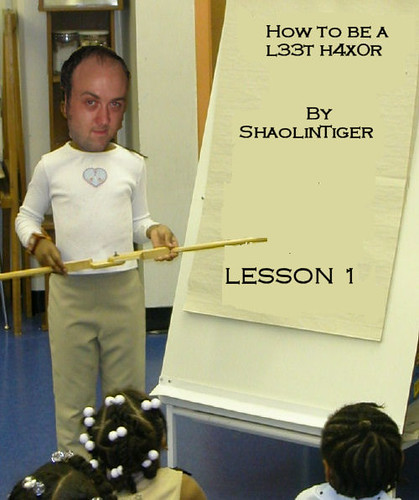 Well I have to say I am quite adverse to teaching, although I will admit I have gotten 1000 times better than I used to be.

When I joined this company I was almost immediately thrown into a teaching position in Singapore, I had never taught anyone before, and honestly had never attended any professional classes so had JACKSHIT idea what I was supposed to be doing and how I was supposed to conduct myself.

As of now I’ve taught in Brunei, Singapore, Malaysia and
That’s what I call baptism by fire. Straight in at the deep end. As it turns out I managed, ok, I wasn’t great, but I didn’t totally fail, and my technical knowledge allowed me to keep the class interesting and varied, rather than the courseware, which was rather poor at the time.

Public speaking is a daunting thing for many I know..teaching is a form of that, although often in a smaller more personal setting.

I know many people who claimed they would curl up and die if they had to speak in front of a crowd, and there’s me, I volunteer to do it 😉

Not the teaching part, that’s forced upon me, but I’ve spoken at conferences and stuff.

I don’t mind teaching smart, like minded people about hacking, because that’s what I love, and to be honest I’m into sharing knowledge, I’m not some elitist asshole who won’t tell you how to do because it makes me feel superior, but if you are a dumbfuck, I will get irritated if I have to tell you more than twice..

I am teaching from now until the end of the year, and sadly I’m destined to go back to my least favourite place in SE Asia, if not the World, yes BRUNEI, OMG I hate that place, but at least I have a couple of friends there now (that I almost managed to kill jajajaj!)…But Ramadan is not the time to be there.

Anyway I may have managed to get out of it for a couple of weeks by doing a web application security project instead, but it looks like I’ll be there from early December until the end of the year.

I’ll be in Mid Valley every day now anyway till early November, so if you want to meet me at Chili’s or something for happy hour, drop me a line!

I’ve had a pretty shit week otherwise at it goes, I’ve been feeling crappy, I might be hyperthyroidic, my hard drive on my PC at home just died and well bleh. I can’t boot my PC with the HDD in as it just hangs at the BIOS ‘Detecting IDE drives’ I think the controller has probably gone, I’m wondering is there anywhere round here that can recover it..

Also I didn’t sleep Sunday night because I was scared I couldn’t wake up on time Monday, bad idea what that…I expect it’ll take me till Wednesday to recover!

I LOVE Banana Leaf Rice on Sundays at Kanna
Kim Gary has a Breakfast Set – WTF?