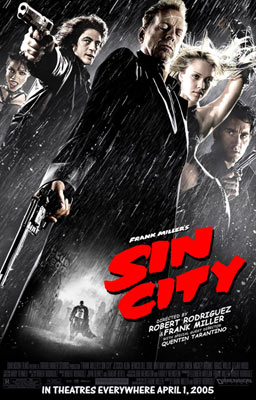 Sin City is a violent city where the police department is as corrupt as the streets are deadly. In this movie, we follow three stories, the central of which is Marv, a tough-as-nails and nearly impossible to kill street fighter who goes on a rampage of vengeance when a beautiful woman, Goldie (King), he sleeps with for only one night is killed while lying in bed with him.

This is a funky film, sex, highly stylized violence from Frank Miller stories.

Almost a work of art rather than a film, it’s a pleasure to watch, even though it doesn’t really have any plot so to speak, it’s just a story about a bunch of good/bad/beautiful/ugly people in a city.

It has a whole black and white mega violence, debauchery, evil grainy, gritty kind of thing going on and it’s chock full of famous faces such as:

Devon Aoki kicks some ass (the chick with the pink car in 2 Fast 2 Furious).

The film is mostly black and white, with certain colours or bits of colours shown for dramatic effect, some red lipstick, a red dress..

Blood is mostly a horrible neon yellow colour which makes the ultraviolence less shocking, but more disturbing in some way on the hole, occasionally you do get the full red splash on someones face..

It’s a very sleazy movie, I guess concentrating on the underworld, corruption and ‘good’ vs ‘evil’ also touching on subjects of female power, lesbianism, mental illness and other afflictions.

The film is basically that, something like pulp fiction, 3 stories told from a certain city where the main characters fall in and out of the 3 different lines..