So duly off I went to Port Dickon after a call out from TBG[/url] and pleading from FireAngel..

We headed up pretty early around 3pm to avoid the traffic and to get our tickets without having to wrestly for them like at Zoukfest last time[/url].

The traffic was already horrible, and I took a long ass way following God’s directions all the way through Puchong, then past CyberJaya finally reaching Port Dickson after about 135km..

The highway was bad, hardly moving, people were resorting to using the hard shoulder.. 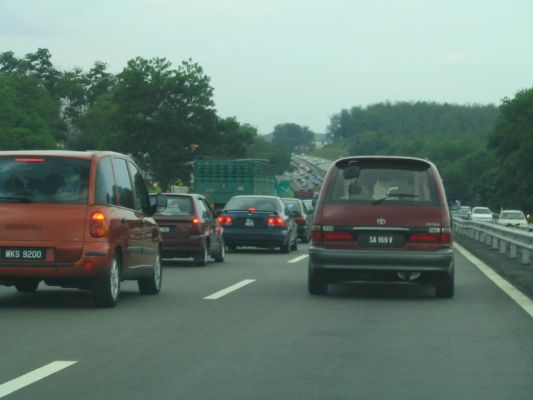 We got there early though and grabbed our tickets at a reasonable 40RM each (including 2 drinks and a free gift, which was actually functional for once).

we were starving after that so we headed to the Pasar Malan to feast on…burgers, lots of coconut juice, deep fried chicken bread, popiah goreng, fried chicken and other stuff which I don’t even know the name of.. 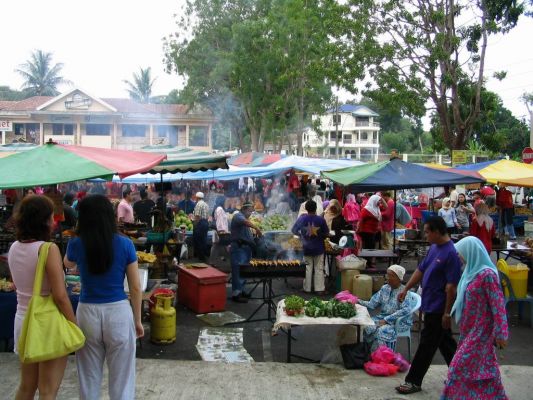 As we went in early, just after sunset we could park inside, in the best car park in the world ever…NOT. 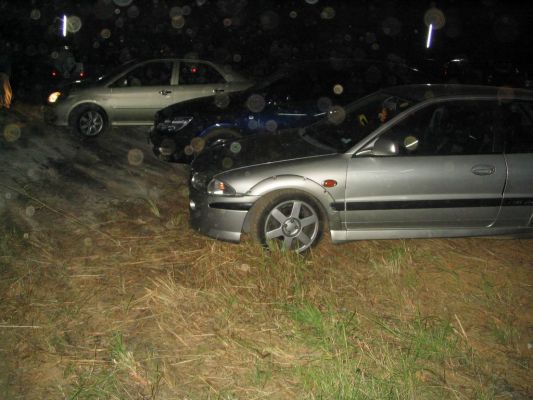 I pity the people at the front, their cars had literally 2 inches of dust on when we left, mine was pretty bad and it was at the back.

I did a massive wheelspin on the way in just to create some haze and make the KL people feel at home *evil grin*.

We were greeted at the front by the Recharge Ferris Wheel.

They had a huge video screen next to the ferris wheel, I mean huge like 40ft high, each booth had a camera in it and the images showed on the screen, kinda cool, a lot of people didn’t notice at first..but they they did, so there was people stripping.. 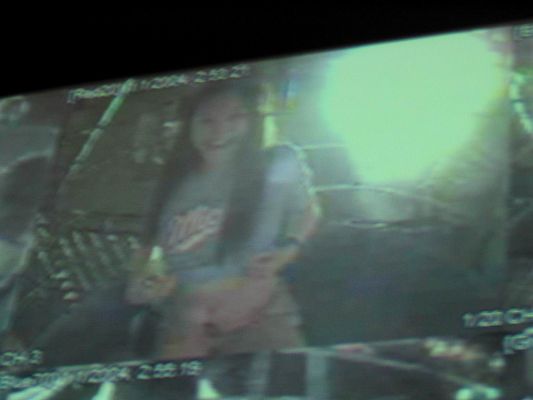 It was pretty quiet when we went in, and technically it’s not really a beach, it’s just kind of sandy.. 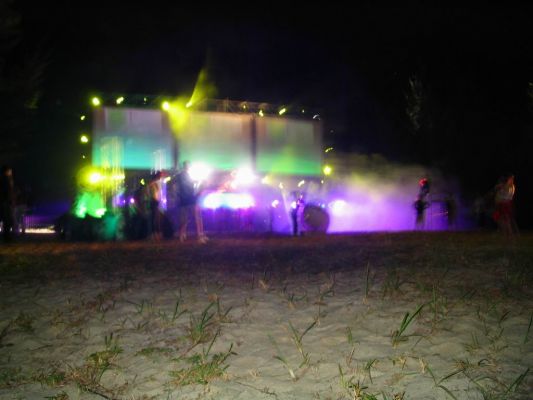 The music was good though.

There was a nice chill out area by the sea with loads of fans and comfy laid back chairs where you could relax and get a hand massage..I mean wtf, it’s not my hands that are tired thanks honey. 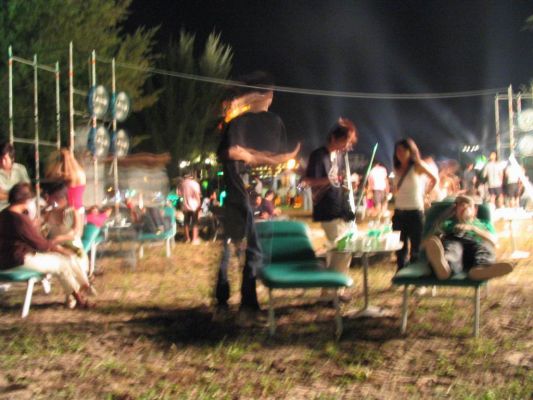 Couldn’t you think of something better to massage? I could suggest a few things..

The Melbourne Shufflers were back, there were 15+ of them I guess I’d say 2-3 were actually good. 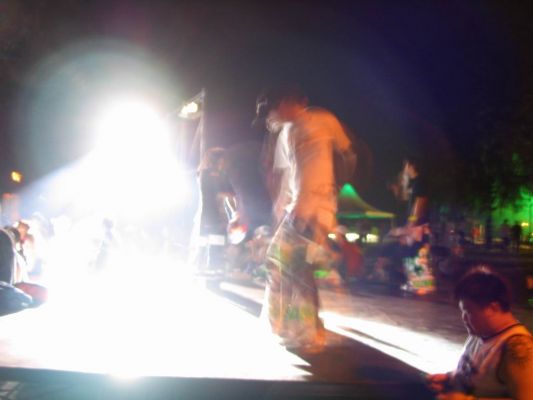 BTW we were doing something like the shuffle in old skool raves back in 1994 before it even had a name, GO PRODIGY GO ALTERN8!

I was touting my trendy water bottle pouch thing that I got as a free gift, and wearing my kickass “I Punch People” T-shirt. 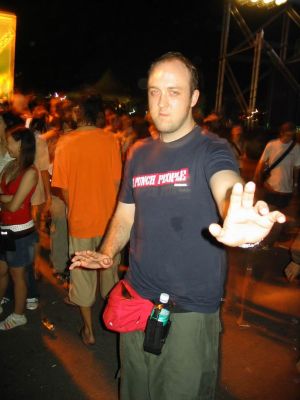 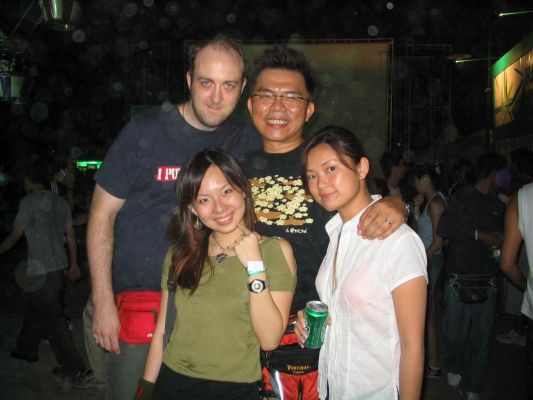 By 12 the music turned shit and it was abso-fucking-lutely packed. Johan Gielsen or whoever the fuck he is was the poorest excuse for a DJ I’ve ever heard, he did like 3 minute build up (which wasn’t even exciting or uplifting or actually even vaguely interesting) then the beat DIDN’T EVEN MATCH. GO BACK TO DJ SCHOOL LOSER.

Then he just played shitty repititive dull techno-ish german shit, not quite gabba but not interesting in any way either.

Before 12 it was rocking, after 12, when Gielsen took the decks, even though it was ram packed, virtually no-one was dancing, before 12 the whole place was rocking. Good one, you obviously have no clue how to work the crowd.. 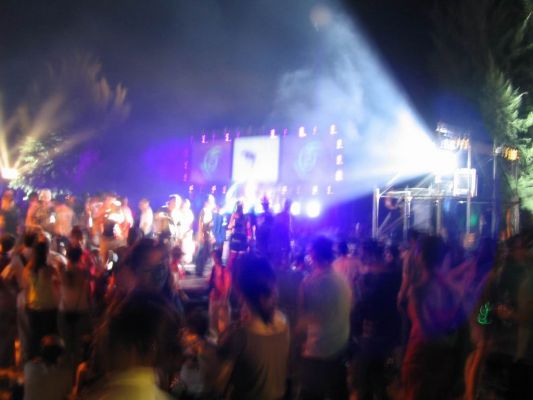 But it was freaking packed, I mean seriously packed, there was no more tarmac left to dance on and sand is pretty hard to dance on, you end up digging yourself into a hole. 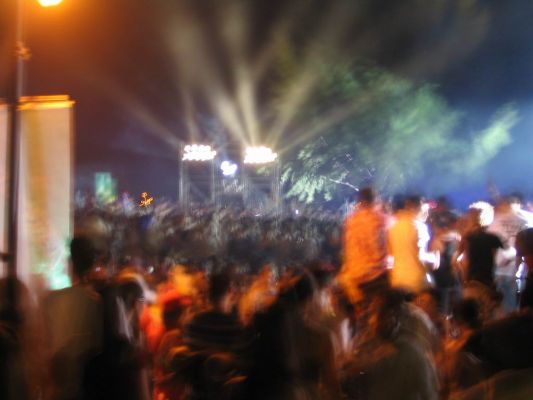 The second arena was a bit sloppy with their music…at one point they played some chart ‘hip-hop’ song, then they played Josh Wink – Higher State of Conciousness, then they played Nirvana, then they started playing some weird trip-hop, I like that music, but how the fuck do you dance to it.

Headed off about 2am, got bored, tired and was hungry..

Went straight back got to Misai around 3.15am, whacked a burger and some Indomee and was truly satisfied, then home for a well deserved sleep.

I think the others left shortly after..I wonder if FA even got to dance.

Yes, I went to R3velation and all I got was this lousy arm band.. 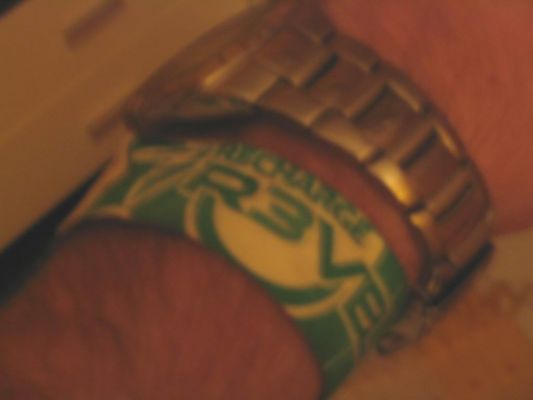 Zoukfest at Genting[/url] was much better, better music too, I heard Scott Project rocked the house, but I’d had enough by then, he came on at 3am.. It’s better to be cold than hot, at least at Genting if you kept dancing or had a jumper it was nice.

In PD if you just stood still there were so many people it got sweaty..

I got recognised twice too, which was kinda cool and odd…one guy from Penang who doesn’t have a blog and a girl selling glowsticks who had her blog URL on the back of her t-shirt, I thought it was Tilla but it wasn’t it was:

She took a pic with me, perhaps it’ll get to her blog, or she’ll send it to me, who knows.

13 Responses to Recharge 3: R3velation – The Aftermath