Well I finally got out of the hotel for a change on Sunday, it was a nice clear day, which was good.

We headed up to Kandy, the hill city.

The main attraction I think is the Tooth Temple (Dalada Maligawa) and the cooler less humid climate due to the altitude. The place was packed as it’s a long holiday, Sinhalese new year fell on Wednesday and Thursday, so most people took Friday off and enjoyed a 5 day break.

It was a fairly long journey, around 3 hours, imagine a narrow winding road, not as steep and winding as the stretch to Genting, but pretty similar…but it lasts 3 hours, urgh.

whilst driving in Sri Lanka it’s quite normal to have regular near death experiences, look up and see a huge bus with bullbars storming at you.. 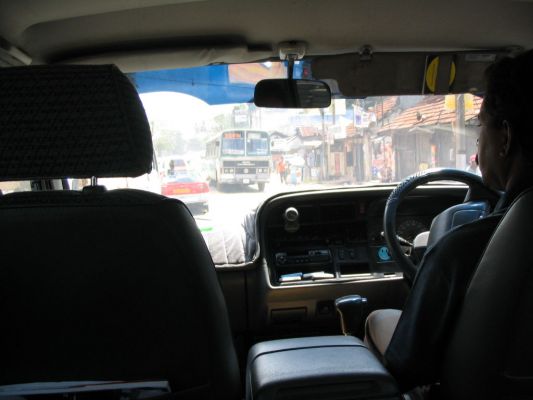 Deafened by the sounds of horns, choking on the exhaust fumes, it’s lovely, really.

There is a lot of derelict shops around the place, a lot warn down facades and places that look like they are about to fall apart.. 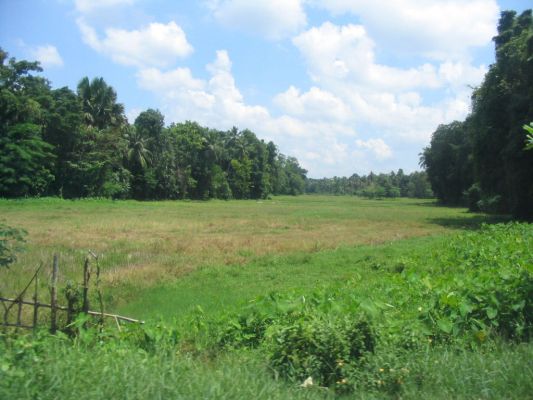 The trip was nice apart from the horrible Tamil music blaring from the self-inclosed 6×9 under my nose.. 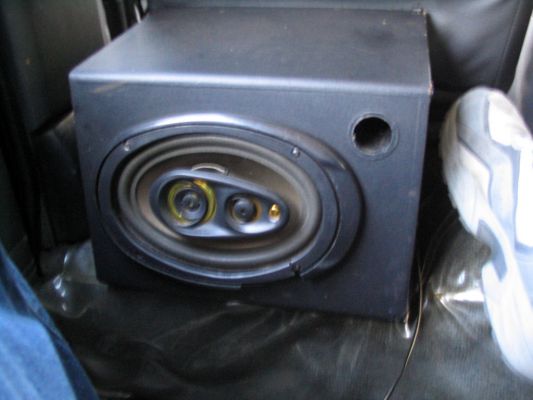 Cricket is very much definately the national passtime, you see kids playing it everywhere. 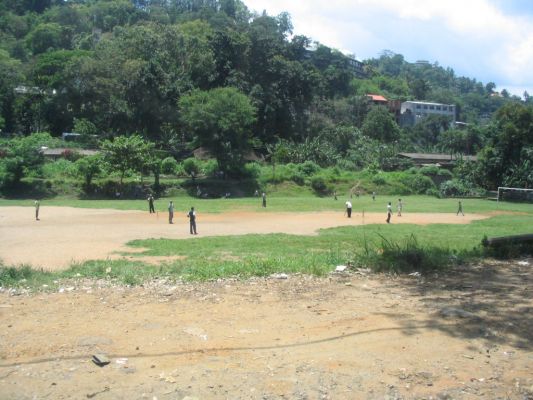 So after lunch at a chinese resturant (food was ‘ok’), we headed to Tooth Temple.. 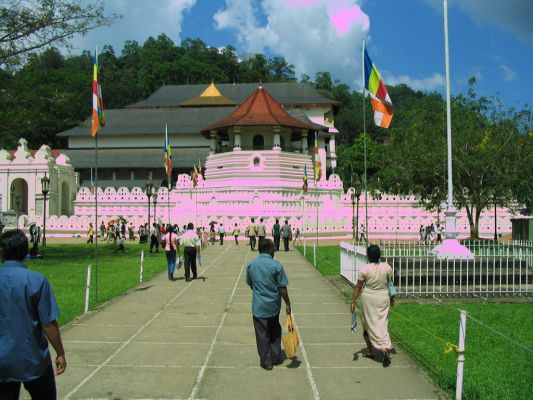 One of the chief objects of interests in Kandy is the ‘Dalada Maligawa’ or Temple of the Sacred Tooth. This is the heart of Kandy, and the Tooth of Buddha is the heart of it. The relic came from India sixteen centuries ago, and moved from capital to capital always with the king. It is rarely shown and never leaves the temple. The temple and the ‘Pattirippuwa’, which is the octagonal building on the right of the main entrance, are enclosed by an ornamental stone wall and a moat. Upon entering, you pass through a small quadrangle and turn to the right, up a flight of stone steps, to the temple. The most striking features that attract one’s attention are the unusual carvings, brightly coloured frescoes representing torments for various classes of sinners, and many images of Lord Buddha. The flower-sellers are ranged on either side and the atmosphere is heavy with the perfume of the white blossoms. Yellow-robed priests flit here and there, whilst the music of the temple bells and the rhythmic beat of the tom-tom fill the air with strange melodies that harmonize with the nature of the city. At the entrance to the sanctuary which contains the Sacred Tooth is an elaborate door, inlaid with silver and ivory, with two pairs of elephants’ tusks on either side. Within this chamber is the huge silver-gilt, bell-shaped shrine that protects the Tooth. Inside this shrine are six inner shrines ornamented with precious stones of rare value.

It was heavily secured with metal detectors and two sets of guards before you reach the inner sanctum. 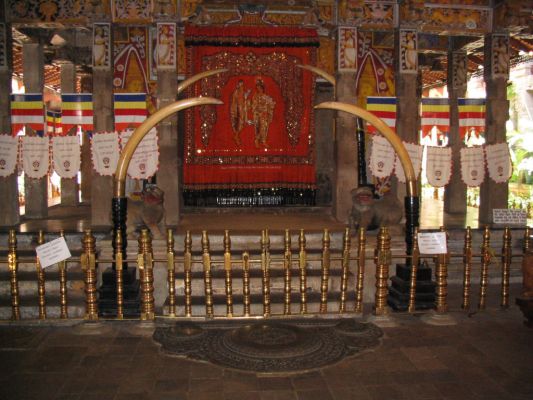 There was also a nice pictorial history in one room with dozens of golden statues.. 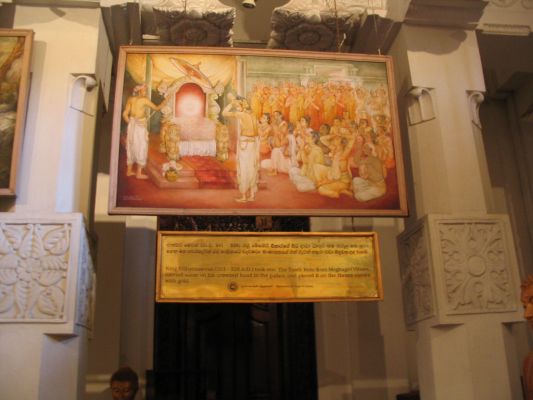 As normal you had to remove your shoes too, but it was FUCKING HOT, I think my feet actually started smoking, the floor was like 6000 degrees.

After that we headed to a lake..

It was pretty and nice, but well it’s a lake, who hasn’t seen a lake before? 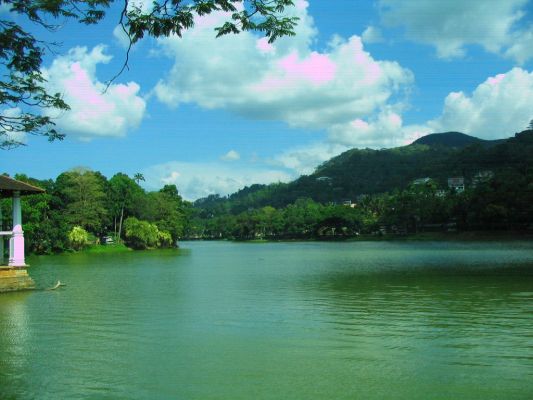 We headed up to the top of the hill and checked out the view of Kandy city.. 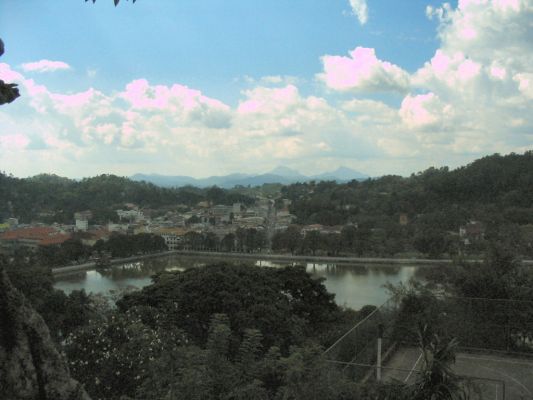 Also some bats, by some bats I mean like 30,000 bats geez they are noisy 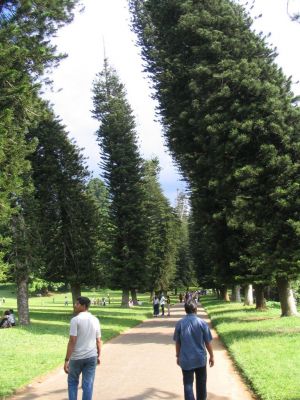 The leaning trees were kinda cool though.

There was also a nice pond.. 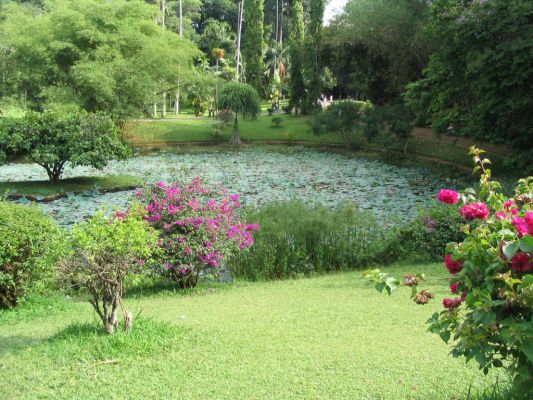 With some flowers and stuff..

I think I walked about 3 miles, that’s enough excercise for the rest of the decade.

Rest of the pictures are in the Gallery HERE.

It was a nice trip, was hell getting back though due to the long holiday and there were some kind of races going on up there..took us like 5+ hours, felt like I’d been shaken around in a peanut can for 5 hours when I got back to the hotel..ordered room service, watched some cheesy TV and knocked out.

Anyway glad to be back soon…kinda getting really really bored here…hope I don’t get shipped off again as soon as I land, that would suck..

Next assignment is supposed to be 2 months in UK, but I haven’t heard anything about it yet *sigh* I came to Malaysia because I wanted to live there…not spend 1 month out of 3 there. And being away sucks, can’t blog so regularly, my average daily traffic has gone from 450 to 230, oh well, at least it’ll keep my bandwidth down. I won’t blog some controversial crap just to get attention, then publically apologise to get more attention.

I blog for myself, I appreciate my posts, so there’s at least one 🙂 I just happen to be good at traffic whoring (without pissing people off)..

https://www.security-forums.com is the ultimate testament to that.