The site in question is https://www.mada.gov.my/[/url] if you visit around the time I posted this you’ll still see the real thing.. 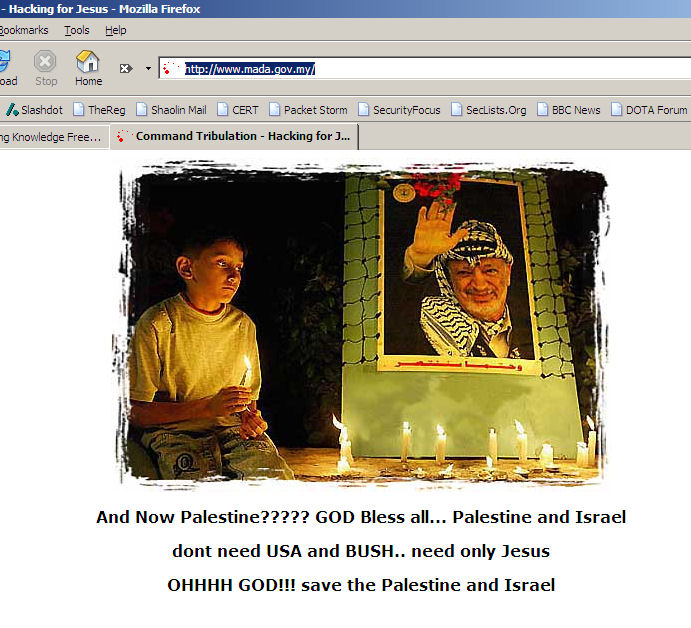 A lot of .my sites got whacked apparently by these guys, probably some lame mass defacement (lots of web sites on the same physical machines), check out Zone-H[/url].

This kind of stuff also has a cheesy name, it’s called ‘Hacktivism‘ something to do with ‘Technopolitics’…

If you are going to deface pages (ultimate skiddy behaviour) at least admit why you are doing it, because of your stupid adolescent ego ok…no other reason.

A huge amount of it goes on, I classify it as new age graffiti, most of it is ugly pointless and ego based..but puhlease…not hacking for Jesus, that’s just plain WRONG.

I found out originally from my friend Dhillon at Hack in the Box.

They say 80% of fortune 500 companies still have unknown backdoors(covert entry channels unknown except to those who put them there).

Anyway this could turn into some long winded and setting the world to rights…so here we go. Prepare to be enlightened.

Hackers are not people who deface web sites (defacing means changing the content to a funny pictures, personal message or as in en vogue now a political message).

Hackers are people with a love of technology and in general how things work, they have inquisitive minds, curious souls and unlike most they need to know WHY and HOW things work..not just that they work.

To quote wikipedia, which sums it up pretty well:

Hacker is a term used to describe different types of computer experts. It is also sometimes extended to mean any kind of expert, especially with the connotation of having particularly detailed knowledge or of cleverly circumventing limits. The meaning of the term, when used in a computer context, has changed somewhat over the decades since it first came into use, as it has been given additional and clashing meanings by new users of the word.

Currently, “hacker” is used in two main ways, one positive and one pejorative. It can be used in the computing community to describe a particularly brilliant programmer or technical expert (for example: “Linus Torvalds, the creator of Linux, is a genius hacker.”). This is said by some to be the “correct” usage of the word (see the Jargon File definition below). In popular usage and in the media, however, it generally describes computer intruders or criminals. “Hacker” can be seen as a shibboleth, identifying those who use it in its positive sense as members of the computing community.

As you can see the negative term has crept into the media and is firmly taken hold..this annoys most of us in the ‘hacking’ community..

It is true there is a middle ground, some skills are used by people from both sides of the fence, but those running downloaded scripts from the net (script kiddies) without any comprehension of what they do should be spanked back to high-school and definately not given the respect worthy title of hackers.

I suggest reading the whole Wikipedia post if you are interested, it pretty much covers all bases, https://en.wikipedia.org/wiki/Hacker

There are also a few more classifications which you might have heard, Black Hat, White Hat and Grey Hat.

Black Hats are the ‘bad’ guys, doing malicious stuff, busting up networks and writing DDoS tools, they are still proper hackers, they are just on the wrong side of the law, Script Kiddies are by no means blackhat…they are just plain idiotic.

White Hats are the ‘good’ guys…security professionals, ethical hackers, whatever you want to call them, the people reaping the money in the security industry, some are excellent, most are not…more skill always lies on the Black Hat side in my experience..The good guys, as with anything are always playing catch-up. Mostly Hacking for fame, notierity, money, altruism or any non-malicious cause.

Grey Hats are the happy medium…perhaps a past in Black Hat activities…or some experience of malicious hacking, moved into the security industry in a professional role and cleaned up…or just undefined…somewhere in the grey wasteland between..I think I am regarded as being here.

There is another metric which is a basic 3-tier pyramid..at the top, the thin part is the elite, the super hackers, those few geniuses that discover new types of vulnerability, write tools like nmap, write the Linux Kernel and so on…then below this is a slightly bigger tier which contains people like me, talented sys-admins, skilled security professional, not super genius status…but good and generally respected…Then at the bottom is the largest part, far larger than the other 2 combined together many times over..this contains the dross, the script kiddies, the people that think having a MSCE makes them god..

I also love the Conscience of a Hacker, from Phrack Magazine…also known as The Hackers Manifesto, it’ll give you some insight into the real hacker mindset..

It’s something I identify with…it’s a beautiful piece of writing, and when I read it the first time I ‘tingled’ haha…I’ve bolded those lines that have been part of my life..

Another one got caught today, it’s all over the papers. “Teenager Arrested in Computer Crime Scandal,” “Hacker Arrested after Bank Tampering”…

But did you, in your three-piece psychology and 1950’s technobrain, ever take a look behind the eyes of the hacker?

Did you ever wonder what made him tick, what forces shaped him, what may have molded him?

I am a hacker, enter my world…

Mine is a world that begins with school… I’m smarter than most of the other kids, this crap they teach us bores me…

I’m in junior high or high school. I’ve listened to teachers explain for the fifteenth time how to reduce a fraction. I understand it.

I made a discovery today. I found a computer. Wait a second, this is cool.

It does what I want it to. If it makes a mistake, it’s because I screwed it up. Not because it doesn’t like me…Or feels threatened by me…Or thinks I’m a smart ass…Or doesn’t like teaching and shouldn’t be here…

Damn kid. All he does is play games. They’re all alike.

And then it happened… a door opened to a world… rushing through the phone line like heroin through an addict’s veins, an electronic pulse is sent out, a refuge from the day-to-day incompetencies is sought… a board is found.

“This is it… this is where I belong…”

I know everyone here… even if I’ve never met them, never talked to them, may never hear from them again… I know you all…

You bet your ass we’re all alike…

We’ve been spoon-fed baby food at school when we hungered for steak…the bits of meat that you did let slip through were pre-chewed and tasteless.

We’ve been dominated by sadists, or ignored by the apathetic.

The few that had something to teach found us willing pupils, but those few are like drops of water in the desert.

This is our world now… the world of the electron and the switch, the beauty of the baud. We make use of a service already existing without paying for what could be dirt-cheap if it wasn’t run by profiteering gluttons, and you call us criminals.

We explore…
and you call us criminals.

We seek after knowledge…
and you call us criminals.

We exist without skin color, without nationality, without religious bias…
and you call us criminals.

You build atomic bombs, you wage wars, you murder, cheat, and lie to us and try to make us believe it’s for our own good, yet we’re the criminals.

I am a hacker, and this is my manifesto.
You may stop this individual, but you can’t stop us all…after all, we’re all alike.

My area of hacking is information…I am information scientist, gathering it, adapting it, improving it, collaborating it, dissemenating it..I am also good at taking good things and making them better..I am a hacker in the kitchen, the living room and in the world of bits and bytes…

This post is far too long anyway, perhaps I shall continue this topic another day..it just started out about a simple web-page defacement…

Kung-Pow! The weekend and rain..
Another weekend gone, another monday arrives..

One Response to OMFG Hacking for JESUS?!? Hacker vs Cracker? Script Kiddiots and more..