I’ve been thinking about backup for quite a while, I’ve been considering online – but I have too much data (photographs in RAW format are BIG) and it’s still too slow (we don’t have fibre to the home like Korea).

Up until now I’ve been using a normal 2.5″ external HDD to backup all the important stuff, but it’s only 120GB and it’s run out of space – so my backups have been on hiatus for new photographs.

Which bothered me. And I’ve always preached the practise of backup, although some people never seem to do it – “It won’t happen to me“. I did lose a HDD a while back, but seen as though I haven’t missed anything – and really can’t remember what was on it, it can’t be that important. But well the other HDDs contain extremely important data.

I’ve been watching out for proper backup solutions for quite some time as the price of storage dropped it started becoming feasible to have a serious external backup solution, from reviews the Western Digital My Book series seemed like the best option. I did look at the Buffalo TeraStation and LinkStation but they just didn’t seem so good, they are quite hard to get here and more expensive.

I had my eye on the My Book Studio 2TB edition as it supported RAID 1 (mirrored) and had eSATA for fast copying.

It ended up though no-one had stock, nor seemed to be getting stock. It was priced at RM1299 for the 2TB version (that gives 1TB of storage with complete redundancy).

I ended up getting the My Book Mirror Edition 2TB – which is about the same but it doesn’t have the other connection options, only USB 2.0 – it still supports proper RAID and gives 1TB of fully mirrored storage. I picked it up for RM999 at Digital Mall. 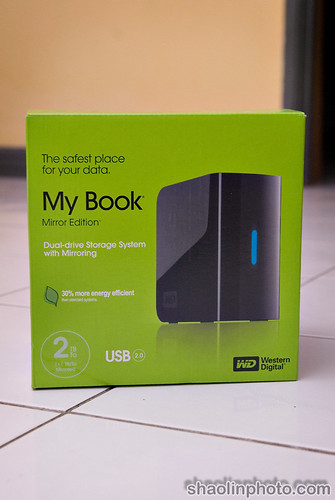 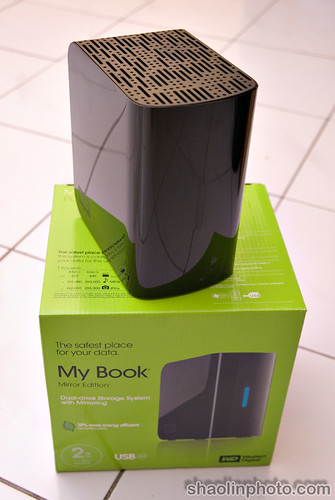 The back is very simple with the power switch, the power connector and the USB port. 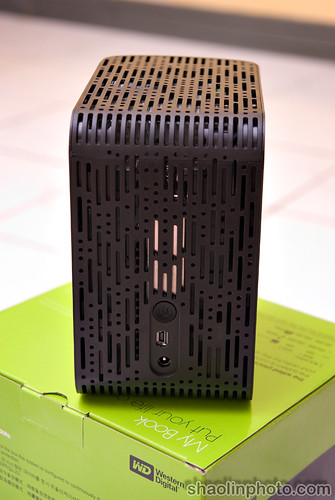 There’s nothing complicated in the box either, just the power adaptor with a nifty selection of plugheads, the USB cable and a CD. 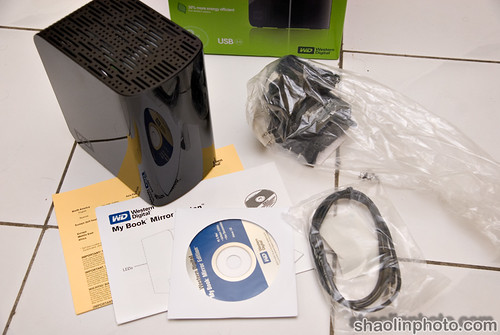 As with the world nowdays (and I agree) there’s no thick manual, everything is on the CD. Not that you need one, it’s super simple.

You just plug it in to a USB port on your PC, plug the power in and it installs itself and shows up as another drive in Windows Explorer, this is what I saw – a staggering 931GB of free space! 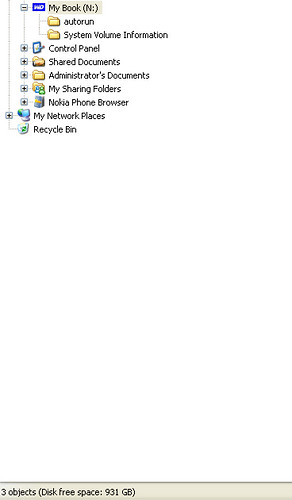 It looks nice when it’s installed too, it’s got a nifty blue light on the front which acts as a kind of status – it moves up and down when something is being copied to the drive.

Then you install the software from the CD (WD Backup Anywhere) and setup your backup plan, it’s really very easy. 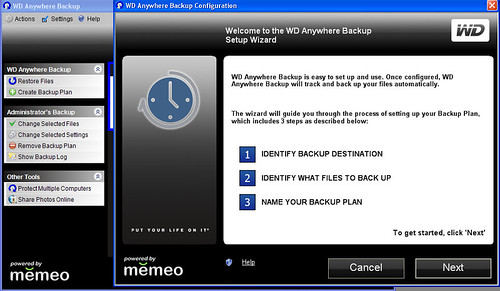 The coolest part is, it’s instant once it’s set up – it monitors all the drives/folders in your backup plan and copies files as they are created. 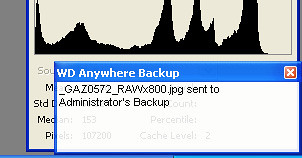 This makes me feel so much better, when copying pictures from my camera I know straight away as soon as it touches down it’s copied to 2 separate HDDs in my backup device.

It shows the status and let’s you know what it’s doing.

And when you mouse-over the icon in the system tray you get this, letting you know your array is healthy and how much space you’ve used.

I started out straight copying some media over to the drive, as I don’t need to keep it on my PC and back it up – I just need to store it. I copied 50GB of files over which I started at 7.36pm and finished at 8.16pm (40 minutes). Not too bad, not super fast but reasonable and no errors or instability.

After that I cleared up my drives (I was running out of space so I had things stashed everywhere) and setup the backup plan. I left it running over night and it was still going next morning, ended up finishing some time that day I think (as you can see above, I have backed up almost 200,000 files).

It didn’t interrupt anything though so it was no problem.

All in all I think it’s a great solution, easy to use, reliable and you don’t need to be technical to use it. Even if 1 of the drives fail and you have to replace it, it’s a screwless operation – straight forwards.

It’s also good value for money to safeguard your data, it’s worth the investment if you have anything you care about on your computer.

Backup up to DVDs is laborious and unless you buy archive grade gold DVDs they don’t last that long – especially in this humidity. It’s cheaper, faster and more efficient to back-up to a RAID array.

Even if you just get yourself an external HDD and start backing up to that, that’s a start. Protect your memories!

The Music Meme – BT – Satelite
Back From Penang