Land of the Dead – Gory! 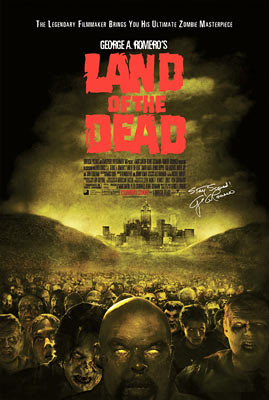 In the 4th installment to George Romero’s “Night of the Living Dead” series, the zombies have taken over the earth. The surviving humans live on a small secluded strip of land, with two sides cut off by rivers. The humans strive to survive, while outside the zombies are steadily evolving…

This is a cool movie! Some might say it’s dumb, but I love crap like this, I’ve watched all of the Romero movies and I love them all, he’s the forerunner in the zombie genre, and has been making these films since Night of the Living Dead[/url] back in 1968.

I think out the series Dawn of the Dead (1978)[/url] is probably my favourite and most memorable set in an American shopping Mall. I haven’t managed to see the 2004 remake[/url] yet however.

I chose to see the DVD as I know it’s going to be a gory movie and the Malaysian censorship board would have a field day removing all the best parts.

It is fairly violent, nasty and can make you squirm at times.

The zombies are back to lurching, creepy ugly looking zombies from the olden days, no more spriting super zombies. 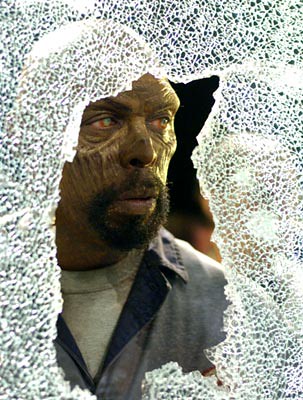 The vein of the film is that the zombies evolve, they start to think again, they start to communicate and move en masse..this was a subtext in some of Romero’s early works (Day of the Dead) and the movie also plays homage in parts to the early parts of the series.

There were also cameos from some of the actors from the earlier films.

There is plenty of gore, eye ripping, limb spewing, intenstine chomping action, the time passed fast and I’d say I thoroughly enjoyed it, it may get slated by ‘film critics’ but I thought it was great.

Grab the DVD and see it ASAP!

18 Responses to Land of the Dead – Gory!