The Hitchhiker’s Guide to the Galaxy – Movie…Don’t Panic! 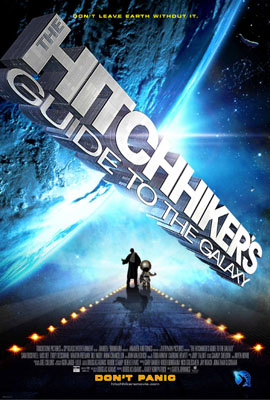 Arthur Dent wakes up one morning to find that the world is ending — literally. Earth is being demolished to make way for an intergalactic highway. Things start to get more confusing for Arthur when he discovers that his good friend, Ford Prefect is actually an alien from a distant star who has been stranded on earth. Ford is actually a traveling journalist for a wholly remarkable book known as The Hitchhiker’s Guide To The Galaxy.

Now Arthur will learn that losing your planet isn’t the end of the world.

This is one of the ultimate geek books, or series of books anyway, H2G2 (as it’s affectionaltley known by geeks) is actually a book and a series…

[list]
[*]The Hitchhiker’s Guide to the Galaxy
[*]The Restaurant at the End of the Universe
[*]Life, the Universe, and Everything
[*]So Long, and Thanks for All the Fish
[*]Mostly Harmless
[/list]The ultimate guide also contains a vignette called Young Zaphod Plays It Safe.

The movie The Hitchhiker’s Guide to the Galaxy[/url], somehow tries to cram all of these into one show, quite impossible…so it ends up as a bit of a jumble including all the buzzwords, or memorable scenes from the series.

There was a dirth of British actors to add some Britishness to the movie, which worked well, but Marvin was a bit of a failure, Mos Def pulled off his part as Ford Prefect well and the acting on the whole was good.

Martin Freeman from The Office[/url] fame did well as the protagonist Arthur Dent and Helen Mirren sounded suitable bored as Deep Thought.

The special effects are great, and it’s good to see some of the things on screen, the improbability drive, the actual guide itself, the Vorgons and their poetry, but in parts it was a little ‘too’ Hollywood.

It’s a pretty bad representation of the books, but if you’ve read the books you’ll probably enjoy seeing all your favourite geeky moments on screen, I did..

If you haven’t read the book you probably won’t understand half of it as it’s an eclectic jumble of peices from the whole series, but whatever you do, YOU MUST READ THE BOOKS! 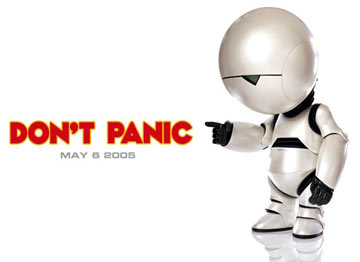 All in all a little disappointed, but well it’s worth a watch if you’re a fan, if not you can probably give it a miss, I’m glad I didn’t take my white towel along afterall.

If they’d just made the first book into a movie it would have been enough already, I know Douglas Adams was involved in the screenplay writing for the movie, but I don’t know his intentions and how much it has changed from the inception.

The BBC TV series is good too, and the radio show, so if you get a chance to check those out, please do.

The BEST PPS Second Bday Bash Post and Photos of ALL
My England Berri Powderful – Is yours?

25 Responses to The Hitchhiker’s Guide to the Galaxy – Movie…Don’t Panic!