Plans for this month, get my ‘office‘ sorted out, this entails getting a nice high back leather directors chair and fixing my PC, I might just go ahead and by myself a Sempron.. (perhaps calling the landlord to fix the fan aswell, it currently spins at highest setting around 2rpm). If I have money left at the end of the month I’ll probably get a fridge too, see how it goes first 🙂

I rather stuffed myself last night in celebration (yes with a lot of crappy junk food)..

KFC for dinner, with plenty of extra gravy (the secret to enjoying KFC is ordering original recipe, and asking for a pot of gravy, OR + gravy = pwn).

Spent the whole night playing DOTA Classic, whooped some ass and sadly got whooped too, had some damn close games though.

Thinking of writing an extensive strategy guide soon for The War Center, probably do the Troll Warlord as he often gets used (and mostly mis-used) in public games.

A lot of people were asking for an MS guide, but Kain has already done it and my MS isn’t THAT gomu anyway.

Had some mad burger love last night before going home (rather later than I should have)..found out the dude we call ‘giraffe’ has a 28″ waist..that’s just obscene, he has a very long neck too, but seriously his burger are best!

Got some pictures of the famous lala, it looks almost as delicious as it tastes. 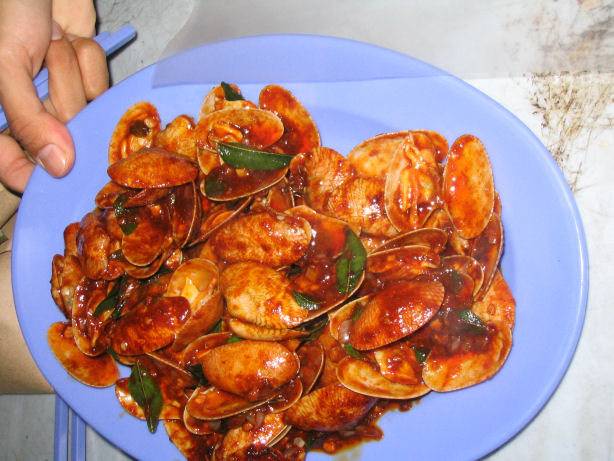 And after we’d polished it off..

The Nasi Goreng (Fried Rice) at this place is really fantasic too!

Finally it’s the weekend, still one lousy module left to finish, then some peace, or proper work at least.

Probably go and celebrate this weekend by getting drunk, yay!

Not sure on the venue yet, if you are a hot nubile chick, feel free to join us, I have plenty of friends to introduce to you.

I have some other stuff to ramble about…but well I really have to finish this damn work..

See you at the weekend 🙂

Tastiness vs Healthiness?
What is a good blog? & BlogExplosion – Stingy Asses!