KL, I am glad to be back…and a Xmas tree! Awesome!

Wow, I haven’t posted for 3 days, I bet you are all getting a little worried eh?

Well as I said, service will be intermittent, especially at the weekends, ’til I get an Internet connection at home anyway.

I have a lot to write so bear with me..it’ll probably be long and rambly.

The adage is true though, abscence makes the heart grow fonder..when you are away from something you miss it more, and when you get back you appreciate it more. I missed KL a lot, the people here, the atmosphere the food…OMG the first day I got back I was even happy to be stuck in a goddamn traffic jam…People in Brunei call a jam 15 cars waiting at the traffic lights..

I have spent most of the week eating, sorry was too busy stuffing my face to take pictures..but I will do over the following weeks 🙂

I have eaten SO much this weekend…it’s been quite disgusting haha, Friday I was off work so I didn’t blog that day either..

Spent the whole of Friday going around doing various domestic things, looking at lights, getting quotes for curtains..after all the first place I went to was cheapest and nicest. The guys seems cool, it’s pretty close to my appt too. I went for some funky modernistic patterns, aight! Cost me the princely sum of $1200RM for the whole place, not bad considering I have a 9ftx7ft patio door. The highest quote was $3300RM OMG! But on the whole they were $1300-1400RM.

Chased up the fella about the TV cabinet, so that should be arriving tonight, fingers crossed. Went back to the place in Kepong with the nice sofa…but sadly they only had it in one cheesin cream and red colour…which wasn’t cool. So off I went.

Then went off to the LDP furniture store near Puchong, I heard it was pretty expensive..and well it is, the Imbi furniture plaza is better. There wasn’t much nice stuff there and it was all slightly over the mark. Had some awesome Taiwan pork chop noodles in SS2 (one of my favourites places).

Spent the evening tidying up.

Friday night decided to go clubbing on the spur of the moment around 1am…after a yum cha/mamak session at Misai with the gang, as Audrey was in town. So off I sped home, got changed and we went to Rush…was there about 45 minutes when the music stopped and the DJ said they had to close early…fucking police raid…was just getting into it as well.

So after that went to one of the faggots houses and had some JW Black label and talked cock.

My car also has developed a weird knocking noise when I cornered suddenly, also a horrible scraping noise sometimes on bumps…I checked under the wheel arch and OMG WTF there was something dangling there knocking on the axle…I suspected it was something suspension related…and it was..

Saturday morning (or afternoon by the time I woke up), I went off to my mechanic and he whipped the dangly part out, turned out it was the anti-roll bar…he’ll give me a call when he gets a new one in. Car will be fine without it, just not so sturdy when cornering on the nearside. Exhaust also rasps at 4,000rpm…so I’ll have him check that, I guess it’s a resonant frequency of something metallic and it’s causing that horrible BBQ set ahbeng[/url] exhaust sound.

After that got stuck in a resturant opposite the workshop because of torrential rain..once I’d escaped I headed off to Ikea! (Prounounced Eye-Keah, like Idea…not Ik-eyah)…spent an absolute fortune! But got loads of great stuff…matts, clocks, shiny things, stuff for the kitchen, glasses, mugs a huge and cool black and white print to hang in the living room, waste-paper bins, tea-light holders and so on…seen as though I was there had to indulge in some Ikea style meatballs with cranberry sauce, man those are great!

After that headed off to Tescos, as it’s near by, bought some pillows, towels, bed linen, cleaning stuff and a few other bits and pieces…managed to blow about 1000 bucks in Ikea and Tescos…ROCK ON! Seemed like a lot after I looked at the paltry 2 ringgit left in my wallet after…but after looking at my appt and all the cool things I got…really it’s not much.

The star purchase of Saturday was definately the most awesome Christmas tree and decorations! 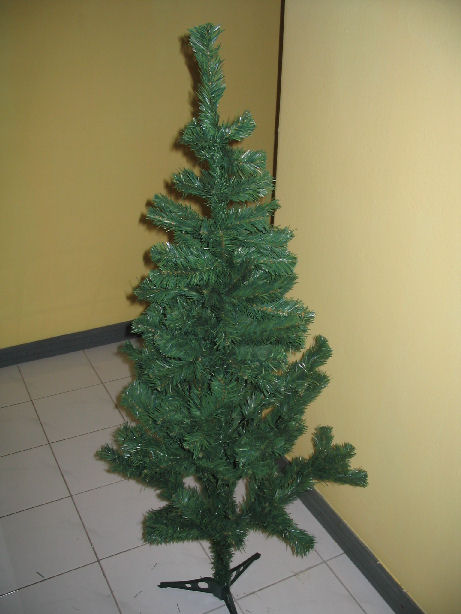 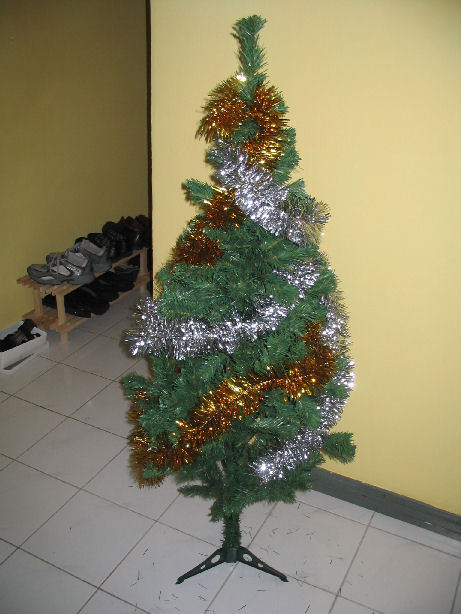 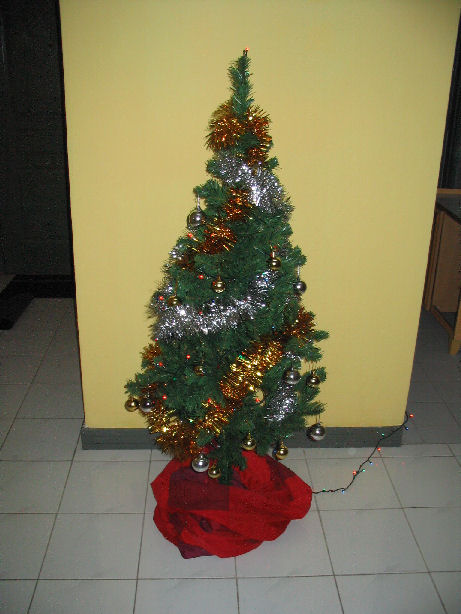 In the dark with the lights: 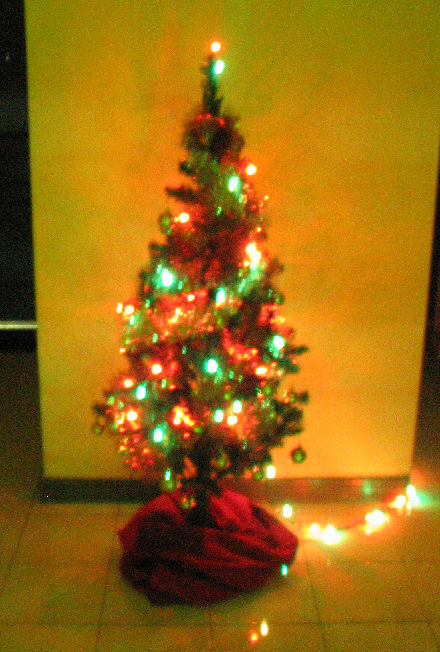 As a side note, someone mentioned to me that I should enquire about the facing of my clock as clock sounds similar to ‘funeral‘ in Cantonese.

To set this straight I enquired…and got the relevant info from those in the know. Clock on it’s own doesn’t sound like funeral, but ‘give clock‘ does. Give clock in Cantonese is ‘sung chung‘ and ‘sung shung‘ in the correct context, means those people who accompany you in death. Grandmas would thus say, it’s not a good idea to give clocks as a present…which still holds true, the facing of the clock with a room, appt or house however has no relevance. So Neh!

I have been looking everywhere for a freaking sofa, it seems impossible to find one that satisfies all 3 criteria (I don’t ask for much):

I went to Lorenzo…awesome, sofas that cost $16,000RM…Fuck you noobs…

I actually ate so many times on Saturday I can no longer even seperate the eating..see Sumo Shaolin this time next week!

Also…I have no bitten my nails forever…must be like almost a week now, there are visible white bits…so cool. I have very proportionate hands, so it seems like a terrible thing to diminish their aesthetic value by chomping my nails off.

I SO MISSED DRIVING MY CAR…perhaps that’s why the anti-roll bar snapped…cos I’ve been hammering it a bit…oh well!

By the time I woke up on Sunday it was almost over…so I went out to eat, again I can’t even remember what I had. Went to check out some more sofa places, at dinner at KTZ in SS2, nice Szechuan noodles and fried stuff (Yam cake, dumplings etc) and big Sago to finish.

Bought a Lavalamp in SS2 Kedai Lampu, so cool, been looking for one for a while. It’s hard to capture the beauty of a lava lamp in a still picture…but I’ve tried. 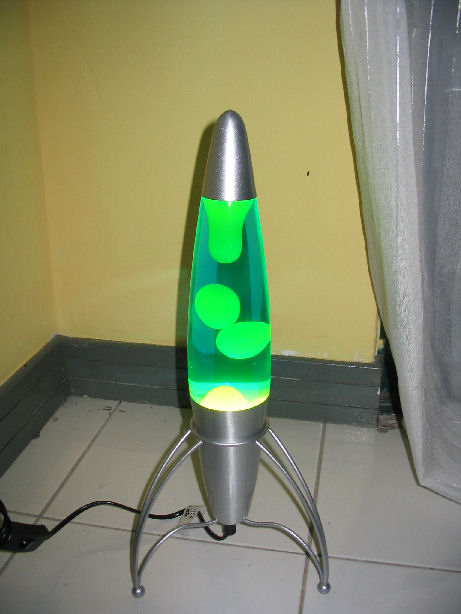 I also spent some time sorting my pictures out, so I’ve updated the Brunei Gallery, I think there’s 53 pics now. Just need to add the comments and stuff.

I added some pics from my Mom’s trip to Malaysia in June too HERE, and a gallery of the new Ferrarri F430. 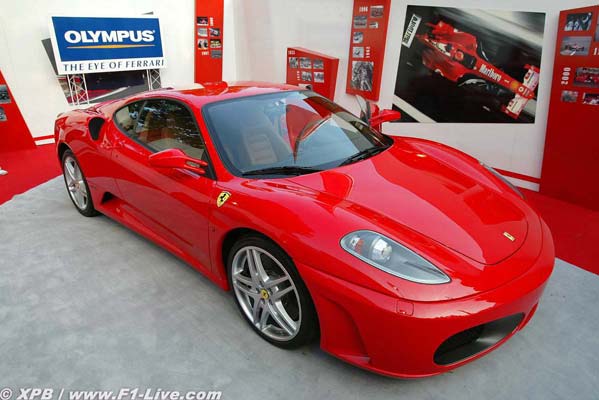 I’ve found some other pics too on a CD, so I can populate some more photo galleries before I fix my PC and start the mass upload.

Anyway that’s my weekend…contrary to popular belief, I do have some work to do, so laters!

10 Responses to KL, I am glad to be back…and a Xmas tree! Awesome!