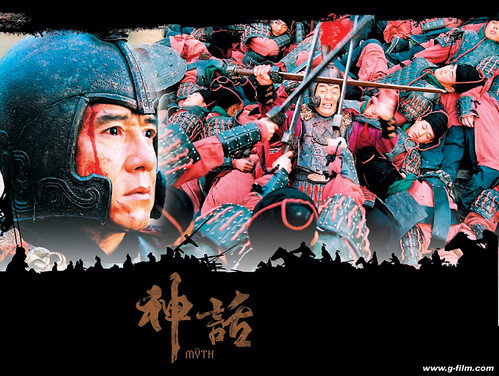 Intrepid archeologist Jack and ambitious scientist William set out on an adventure that would lead them to the greatest discovery in Chinese history.

So I went to see The Myth at the plush new GSC at 1-U, I still love that place!

I was out and about doing interesting stuff like paying bills..

I also stumbled across a new clearance show in Ikano Power Center (It’s next to the Sony Shop), and they are selling loads of branded stuff at bargain prices (Ralph Polo shirts for RM25, cheapest I’ve seen before is RM80 at F.O.S. and I got one for RM40 in Philippines!), also stuff like Bum, Burberry, Fossil etc. Got a whole bag of nice stuff for like RM100! Most the stuff is RM7, RM10 or RM13!

Anyway, back on topic..

This movie was ok, I was kind of expecting it to be an epic oldskool movie, like Chinese Gladiator or something from the trailers, I don’t recall seeing any ‘present’ scenes there.

It wasn’t, it turned out to be a fairly standard Jackie Chan meets Indiana Jones kinda movie. The historic scenes were very good and were done well with actors from multiple countries (struggling to speak in Mandarin) and some great fight sequences and JC’s patented acrobatic jumping around stuff.

The special effects were awesome in parts, and very college like in others, obvious ‘blue screen’ effect. No consistency.

There was also a random part where a gorgeous babe was shown almost naked for no aparent reason? (Mallika Sherawat).

The acting was ok, the Korean chick was a typical Korean chick, JC was his normal jumping around self.

The plot was pretty good and original, but wasn’t directed so well. It was a fairly entertaining film with some funny parts, but some parts just draggged, really dragged.

It’s worth a watch if you like the typical Jackie Chan action/comedy kind of movie.

If you don’t, you’ll probably think it’s a heap of shit.