I’m sure all techies/geeks/computer literate people are familiar with concept..

Once you know something about PC’s, the worst is having a degree in computer science or similar, everyone, their aunt and their dogs automagically excepts you to spend hours fixing their PC’s for free, I mean WTF is that all about?

You know what all techies should be give a free t-shirt when they graduate like this: 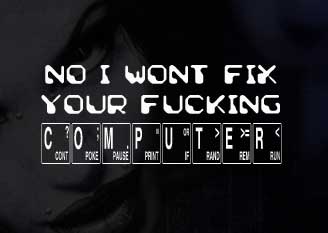 I’ve had it so many times I actually have gotten sick of it, it was worse back in UK as here most of my friends are at least partially tech-savvy, but still some like Faggot cannot keep spyware off their PC for more than 2 days…STOP SURFING SO MANY DODGY PR0N SITES DUDE!

It’s always the same though, especially people from older generations…

Aunt: “Hey, I heard you are a PC wiz?”
Geek: “Er, Yeah I know a bit about computers, you could say that”
Aunt: “Well my PC is broken”
Geek: “So…what’s wrong with it?”
Aunt: “You’re the wiz, I thought you’re supposed to tell me that?”
Geek: “You wouldn’t take your car to a mechanic and just say ‘There’s something wrong with it’ right? You have to give us a clue..”
Aunt: “Blah blah blah, by the way I think my cup-holder broke, I’ll show you..”
Geek: “OMFG YOU NOOB THAT’S A CD-ROM DRIVE!”

Anyway what IS up with that, it’s not like people hear their friend just got a qualifaction as a nurse and then asks them round to look up their arsehole cos it’s itchy?

Same if people know mechanics, they take the car to the workshop, they don’t call the guy and ask them to come round and spend a few hours in the garage fixing their car for free…

Some tips for you anyway, FOR FREE..

1) Use FireFox[/url] to avoid problems with Spyware and Adware
2) Just incase, install Spybot S&D and Ad-Aware[/url]
3) If you need a good free Anti-Virus I suggest Avast!
4) Back-up your important stuff (Photos/documents and so on), buy a CD-writer and some blank CD’s both are very cheap now
5) Switch off and unplug your PC and modem during electrical storms unless you have a GOOD surge protector
6) Defragment and Scandisk your PC now and then to keep the filesystem healthy
7) Don’t keep millions of crappy files on your computer that you don’t need
8) Don’t install every demo game and shareware crap you see
9) Be cautious when downloading dodgy software and from where
10) Support OPEN SOURCE software (Firefox, Thunderbird, FileZilla etc.)
11) Disable uneccesary services in Windows (Info HERE)
12) Run Windows update regularly HERE
13) If you are directly connected to the net use a personal firewall like ZoneAlarm

Don’t assume just because we know about computers we want to fix your shit, if you take care of your PC, we won’t NEED to fix it, educate yourself, educate the other people that use your PC.

If you don’t know something, go to Google and SEARCH for it, don’t be a dumb ass and just ask, because you are lazy.

If you need to ask questions online at a forum like SFDC[/url] for example, or in Usenet please read this first: How to Ask Smart Questions

A lot of the same advice runs for real life, you will get a lot more positive response from anyone with a brain if you demonstrate you’ve actually done something for yourself or thought about it, like tried to fix the problem, or done some research or what. For sure then we’ll help you..

But if you are just a lazy dumbfuck too stupid to look up anything yourself, you can lick my salty nut sacks ok.

Things like that really bug me, it’s like at my old workplace when people used to assume because I’m in I.T. I know everything about computers, including Excel, Word and other crap which I don’t even use (I am an OpenOffice[/url] advocate). This sometimes extended to ridiculous lengths, at one company I was in I.T. so apparently I also knew about everything that was electrical or communications based, like phones, faxes, photocopiers and once even a fucking TOASTER.

How stupid is that?

Yeah I know about computers, does that mean I know about faxes and photocopiers, no it fucking doesn’t ok, but more often than not I could fix the problem as I just looked at the instructions (RTFM) and WORKED IT OUT.

I got all kinds of dumb questions like that…something along the lines of “How do I do XYZ in Word?”

HOW THE FUCK AM I SUPPOSED TO KNOW

So what do I do, I hit F1 and search the help index, look around in the context menus or Google it, and I will work it out or find it..I mean surely that’s not rocket science right?

People need to think before they speak…problem is I am ranting here, but all the people that will read this are already informed, techno-literate (in most part) people…not the unscrubbed, ignorant, un-informed masses that PISS ME OFF.

Anyway there’s a Friday rant for you, have a great weekend.

Firefox 1.0.2 Released – Reclaim the web!
The Earthquake – From Colombo..