Posting Spoilers on Social Media – Yes you are a TWAT

It’s been a while since I’ve posted a ranty blog post in this category, 4 years in fact. It used to get fairy well used haha.

Part of what blogging used to originally be I guess, a diary, a journal, somewhere to vent, somewhere to be grateful, somewhere to celebrate. I guess we should go back to that type of blogging, lose the commercialism. I think medium.com has brought that back to some degree.

Anyway, that’s off topic. Because for now, I want to talk about selfish, self-absorbed pricks who are into posting spoilers on social media – be it about a movie or a TV series, either way it is 100% guaranteed that you are ruining SOMEONE’S enjoyment.

But then the people that post that kind of stuff obviously don’t give a shit about anyone else do they, empathy? Realizing that not everyone watches new episodes immediately when they come out – that’s too hard.

Me for example, I like to wait until the entire season is finished, then watch it all at my own pace (and that’s a very normal way to consume now, Netflix realized that and release their series in a single chunk, so you can binge watch House of Cards in one weekend).

Yah, I get excited about TV shows sometimes too, and you can post stuff without being explicit about details. I don’t post spoilers because I know for a fact there’s a lot of people who don’t watch stuff until much later, which is fine – I’m not going to be the one to ruin their fun. If you need to discuss it, do it in real life with people who’ve also watched it already.

It’s like those people that come out of the movie theatre and start telling everyone about the movie they’ve just seen in explicit detail without asking everyone if they’ve watched it first..

It’s that’s bad, there’s actually an app to deal with it called Spoiler Shield (unfortunately only for iOS).

If you REALLY REALLY must post a spoiler, how hard is it just to type SPOILER ALERT, then a few lines of dots so that whatever you type is hidden below ‘See more’. Like a friend that did this for example – this is what a decent human being does: 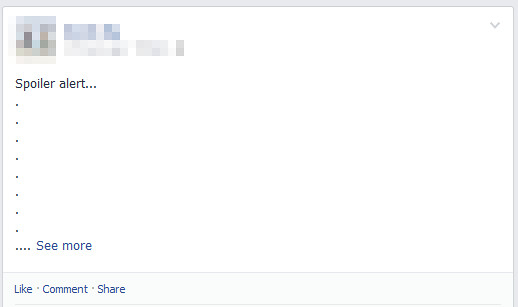 There’s collapsible spoilers plugins for WordPress, there’s spoiler functionality in Tumblr and other platforms, it’s there for a reason – because posting spoilers out in the open is a DICK MOVE.

Spoilers alerts used to be a thing, I guess people used to care about each other more. Now they think since the media publish spoiler stories, it’s ok for them to Tweet/Facebook it – the fact is it’s easy to avoid reading spoiler stories and they are generally well marked.

It’s hard to avoid it on Facebook when you open it and someone’s posted a massive spoiler with pictures and explicit details and it’s at the top of your news feed – pray tell how do I avoid that?

And the funny part is, in Game of Thrones for example – I’ve read the books..I could spoil the fuck out of the whole season, and the next season..But I don’t.

For those that are looking for a timeline on when it’s ok to post spoilers, honestly it’s not really ever ok – I watched The Sopranos in full 6-7 years after it came out. I avoided reading anything about it until after I’d watched it.

The sad part is, the people who do it don’t even care, they won’t read this, they won’t stop being pricks – there’s no cure.

Happy 36th Birthday To Me! And WE ARE HAVING A BABY!
A New Annoyance – Twitter Favourite Spam